JOSEPH F. GIRZONE retired from the active priesthood in 1981 and embarked on a second career as a writer and speaker. In 1995 he established the Joshua Foundation, an organization dedicated to making Jesus better known throughout the world. His bestsellin

Released: April 16, 2002
THE MESSENGER: A PARABLE
by Joseph F. Girzone
Released: April 16, 2002
THE MESSENGER: A PARABLE
by Joseph F. Girzone
"Girzone still oraculates his story in parables, but this mode is mushy when he should give real sinew to Francis's antagonist."
Girzone's fans, who have followed the parablist through his many slim volumes of simplistic restatements of Christ's messages, as well as his taking on of new subjects such as gay marriage and women in the priesthood, will be delighted to hear that his Jesus figure, Joshua (1990), will arrive in movie theaters next spring just as this new book comes out. Girzone, who retired from the active priesthood in 1981, is on a mission to lift Christ's parables out of the archaic and bring them to modern man—call it Christ in khakis, perhaps. In The Messenger, he takes on the divisions in the Kingdom of Light (the Catholic Church), the bureaucracies swamping the Vatican, the splinter groups abandoning the Kingdom's authority, and non-Kingdom preachers springing up with flocks of their own, and so on, all of this making Christ fade from the forefront of faith. This time, Girzone gives up Joshua for Francis, a maverick priest seemingly based on Girzone's own life and career. Francis flies about the globe making friends and giving long talks about the King (Jesus), whose tender spirit has been wounded by the many cracks splitting his Kingdom. Read full book review > 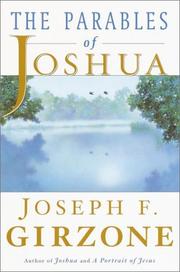 Released: April 1, 1995
JOSHUA AND THE CITY
by Joseph F. Girzone
Released: April 1, 1995
JOSHUA AND THE CITY
by Joseph F. Girzone
Having brought peace to the strife-torn Middle East in his last outing, Joshua and the Holy Land (1993), the mysterious Joshua returns to set his sights on an even more challenging task: reforming that Sodom-and-Gomorrah-on-the-Hudson—New York City. Joshua arrives, and as he walks up Broadway he encounters a young runaway named Charlene who has turned to prostitution. In the wink of an eye, he frees her from her pimp and convinces her that she should give up life on the streets and return to school. Continuing on with his new convert, Joshua enters Central Park, where he meets a woman who suffers from incipient Alzheimer's. One touch and she too is cured—and she agrees to adopt Charlene and send her to a suburban boarding school. Walking on alone, Joshua emerges on the far end of the park in Harlem. He plays basketball with a group of African-American youths who touch him with their good hearts and lack of hope. He begins teaching them the skills to start their own businesses, but, of course, it's not enough. Fortunately, the husband of the senility victim he healed is a wealthy developer, who out of gratitude now agrees to buy up and redevelop the entire neighborhood. Joshua's greatest miracle, though, is that in all this urban renewal no one is displaced. And so it goes: As the development project proceeds, Joshua roams about doing good, helping a mother's drug-addicted son, comforting a dying AIDS patient, battling the evil influences of the occult, fighting Satan in the guise of the mercurial Lucius Fabian, all the while spouting ever higher platitudes like a politician on a bad day. More blandly inspirational fare for Girzone's rather sizable readership. Read full book review > 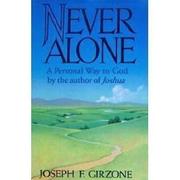 NON-FICTION
Released: March 11, 1994
NEVER ALONE: A PERSONAL WAY TO GOD
by Joseph F. Girzone
NON-FICTION
Released: March 11, 1994
NEVER ALONE: A PERSONAL WAY TO GOD
by Joseph F. Girzone
The author of the best-selling Joshua series offers a practical guide to the challenges and pitfalls of the Christian's spiritual life. In his first nonfiction, Girzone shares experiences from his own life and draws on the wisdom of the centuries, writing with his usual humanity and insight. Each chapter outlines a further stage on the spiritual journey. Girzone tells how he first felt a desire for God in his childhood experience of aloneness: he believes that this desire is the basis of religion and something everyone has but that many, including some religious people, are not conscious of. The great means to awareness is prayer. Our author suggests that prayer has less to do with changing things than with ``just putting yourself in God's presence and sharing with Him what you are feeling or what you are suffering, and saying, I just want to be near you and open my heart to you.'' Girzone emphasizes the need to be free from attachment to things and even our own religious feelings (or lack of them) when we are praying. He warns that freedom can be unwelcome: we find ourselves becoming accountable for our choices, maybe changing our view of things or following where God may want to lead us. Girzone observes that religious people often try to manipulate others rather than respect their freedom, but he writes with great compassion and is able to teach without talking down to his reader. At times he betrays a certain animus against the authorities of the Church, and he fudges the issue of the role of the sacraments in Christian life (``Jesus did have little rituals...''). The non-Christian seeker will find much of value here. A refreshing alternative to the feel-good bromides on the personal religion market. Read full book review > 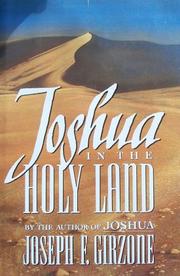 Released: Oct. 1, 1992
JOSHUA IN THE HOLY LAND
by Joseph F. Girzone
Released: Oct. 1, 1992
JOSHUA IN THE HOLY LAND
by Joseph F. Girzone
Girzone's enormously popular Joshua series (The Shepherd, 1990, etc.) continues, now taking its charismatic, Christlike protagonist to present-day Israel, where his updated parables and common-sense approach to peace spread oil on historically troubled waters. Just exactly who is this fellow? Girzone never quite says he's Jesus of Nazareth back for another round with a screwed-up world, but he hints heavily. The young man always knows the names of people he meets for the first time; he never gets worried; he knows Israel like the back of his hand; and he never talks in contractions. On foot (sandaled), the friendly, well-tanned young man wanders into an Arab camp bearing a lost lamb belonging to the granddaughter of the local sheik. Hitting it off with the aged sheik (but not with the sheik's son), he stays to supper and later that night cures the granddaughter of snakebite. It's the first of a string of miracles for which Joshua takes no credit, pointing out that that sort of thing is God's work. The grateful chieftain provides the friendly Jew an entree into the Arab community, the first step of a nonpolitical peace process that actually works. Strolling around Israel, Joshua chats up Christians, Moslems, and Jews, making friends and followers wherever he goes, pointing out quite sensibly that things aren't going to be better until everybody stops indulging in vengeance and gets down to the work of getting along. There are numerous parallels to events of two thousand years ago, but the actors are new, and the results more upbeat. Affecting at times, and never smarmy. Still, not for the cynical. Read full book review >