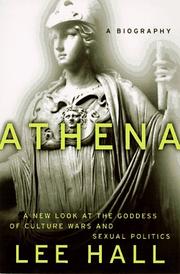 NON-FICTION
Released: May 1, 1997
ATHENA: A BIOGRAPHY
by Lee Hall
NON-FICTION
Released: May 1, 1997
ATHENA: A BIOGRAPHY
by Lee Hall
A spirited if sometimes familiar retelling of Athena myth and lore that unveils the goddess as a complex, changing personality and object of worship. Hall, former president of the Rhode Island School of Design and author of a biography of the de Koonings (Elaine and Bill: Portrait of a Marriage, 1993), is not a classical scholar, and her book seems aimed more at a popular than scholarly audience. The opening chapter on Athena's prehistoric origins offers a clichÇd account of the evolution of religion from hunting ritual and embraces too easily the pleasing story of the ancient Great- Goddess-worshiping matriarchies. The bulk of the book, however, consists of Hall's vivid retellings of the Athena myth. While not eclipsing Robert Graves or Edith Hamilton, Hall does contribute her own novelistic flair, as when Zeus wakes up ``from a snooze'' to give birth to his daughter, who is pounding ``the inside of the expectant father's cranium.'' More important, by focusing on Athena, the author transforms the goddess from a supporting character to the star she once was. In some cases, the method falters: The retelling of Homer's familiar epics gets tiresome. But many stories come off as both fresh and revealing, whether they concern Athena directly or indirectly (for example, how Hera's breast spewed out the Milky Way). Given the welter of contradictory myths, the ``biographical'' approach is at best a conceit: Athena's evolution from crafty, vengeful warrior to emblem of wisdom and justice makes sense not as an account of an individual's development but as a reflection of the changing times in which her worshipers lived. However, Hall succeeds in making those connections clear, right up through the religious practices of classical Athens and Athena's incorporation into Neoplatonic doctrine. Bringing out a full-bodied Athena, Hall leaves one wanting to reread the ancients and think again about the gods. (b&w photos, not seen) Read full book review > 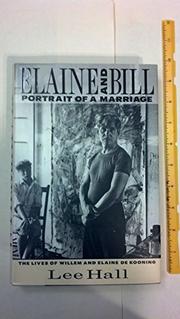 NONFICTION
Released: June 30, 1993
ELAINE AND BILL: PORTRAIT OF A MARRIAGE: THE LIVES OF WILLEM AND ELAINE DE KOONING
by Lee Hall
NONFICTION
Released: June 30, 1993
ELAINE AND BILL: PORTRAIT OF A MARRIAGE: THE LIVES OF WILLEM AND ELAINE DE KOONING
by Lee Hall
An unvarnished life of ``action painter'' Willem de Kooning and his artist-wife, by Hall (past president of the Rhode Island School of Design; Betty Parsons, 1991—not reviewed). While focusing on the deeply troubled relationship between the introverted Dutch-born Abstract Expressionist and the ebullient Brooklyn woman he married, Hall also presents an overview of the couple's art-world contemporaries: Jackson Pollock and his wife, Lee Krasner; Arshile Gorky; Robert Motherwell; David Smith; Franz Kline—in Hall's telling, a pretty unappealing lot of bed-hopping brawlers, blowhards, and bigots. The de Kooning marriage was an open one with each partner engaging in a seemingly endless series of affairs: As her husband's reputation as a leader of the emerging New York School of the 1950's gathered steam, Elaine, in order to further his career, embarked on affairs with art critics Thomas Hess and Harold Rosenberg. Even so, fellow action-painter Jackson Pollock's reputation outshone de Kooning's, at least in the popular press, and the two men became rivals, not only for artistic kudos but also for women. Who could best hold his liquor also became a point of contention, though both ended up as alcoholics. When Pollock was killed in a car crash while drunk, de Kooning's reputation as ``the greatest American painter'' soared. His works commanded higher and higher prices—but his drinking escalated as well. The de Koonings eventually separated after Willem fathered an illegitimate child and Elaine sank into dipsomania. But after 20 years, the couple reunited, and Elaine, recovering from alcoholism, devoted her final years to protecting the health and reputation of her husband, who became ever more reclusive and detached. In 1989, Elaine died of lung cancer; today, the ``American Picasso'' has been declared mentally incompetent, his daughter and a lawyer acting as his co-conservators. Written in pedestrian prose—but nonetheless a continually engrossing, if depressing, portrait of an American master. (Sixteen pages of b&w photographs—not seen) Read full book review >