In a professional writing career that spans more than thirty years, Marita Golden has distinguished herself as a novelist, essayist, teacher of writing and literary institution builder.Her fiction includes the novels Long Distance Life, (a best-seller, 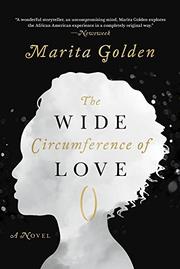 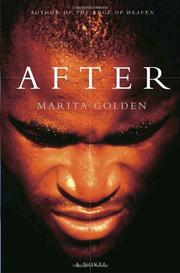 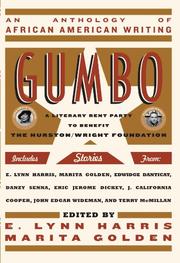 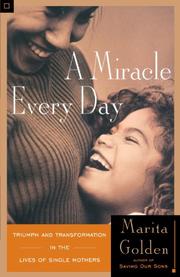 NON-FICTION
Released: March 16, 1999
A MIRACLE EVERY DAY: TRIUMPH AND TRANSFORMATION IN THE LIVES OF SINGLE MOTHERS
by Marita Golden
NON-FICTION
Released: March 16, 1999
A MIRACLE EVERY DAY: TRIUMPH AND TRANSFORMATION IN THE LIVES OF SINGLE MOTHERS
by Marita Golden
Single mothers get a break in this welcome, although slim, rebuttal to the frequently cited statistics that children from single- parent homes are destined for trouble. Herself a single mother during her son's critical middle years, novelist Golden (Creative Writing/Virginia Commonwealth Univ.; The Edge of Heaven, 1997, etc.) celebrates the sons and daughters of single mothers who are not negative statistics. She was galvanized by a research study that dared to wonder, "If one out of every twenty-two African American males will be killed by violent crime, what about the other twenty-one?" Accordingly, Golden surveyed the lives of single mothers whose children have avoided violence and trouble with the law and appear to be on the road to personal and career success. Among them are Charlotte, who raised five drug-free, jail-free sons in a Washington, D.C., ghetto solely on the income from a job as a school cafeteria worker; Claudia, a lawyer and administrator, who adopted a baby daughter, now grown into a thoughtful and self- confident teenager; and soccer mom Janet, whose marriage to a corporate executive dissolved, leaving her with two children and no ostensible skills. Janet returned to school and discovered talents for writing and teaching. Most of the other women introduced in this book didn—t choose to be single mothers, but once assuming the role, found their children to be as much of a support to them as they were to their children. Golden believes that they took systematic steps to clear-cut goals, seeking support in a religious faith, in extended family (including church and community groups—and, not always least, the children's fathers), and in professional counseling or mediation; they also benefited from ambition, optimism, and an ability to let go of the past. Cheers, for a change, for the resourceful and resilient single parent and for the rewards that can come to both mother and children. (Author tour) Read full book review > 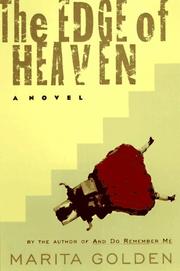 FICTION & LITERATURE
Released: Jan. 5, 1998
THE EDGE OF HEAVEN
by Marita Golden
FICTION & LITERATURE
Released: Jan. 5, 1998
THE EDGE OF HEAVEN
by Marita Golden
An acclaimed chronicler of black women's lives (And Do Remember Me, 1992, etc.) shows what happens when a good marriage goes bad. Set in the sophisticated milieu of black professionals living in Washington, the story is told by Teresa and her parents, Lena and Ryland. It begins on the day that Lena is to be released on parole from a women's prison in West Virginia after having served a four-year sentence for manslaughter. Teresa, who's been living with grandmother Adele ever since her younger sister Kenya died, hasn't told her chums or her boyfriend Simon the truth about her mother. Now in college and working as a summer intern in a Washington law firm, she viscerally dreads her mother's return. As the story moves back and forth in time, Teresa reveals how she's long felt torn between hating her mother for what she did and pitying her for what she had to endure. Before everything went wrong, her mother had been someone to admire: a successful accountant in a top firm and a loving mother and wife. Her husband Ryland, an artist who worked at home and took care of the two girls, had been especially close to Kenya, who shared his love for art. But as Lena's career flourished, Ryland's languished, causing friction that proved difficult to mend. The couple's quarrels turned increasingly violent, until Ryland finally moved out. His departure unhinged Lena, who started drinking and, in anger, accidentally pushed Kenya down the stairs. Even so, as Golden persuades us, these women can be strong on their own terms. Emotions run high—the plights of black (and white) women let down by men and the world are sharply etched—but telling insights soften the rage and give it balance. For Lena and Teresa alike, life will go on. Golden, in her fourth novel, is writing in top form. Read full book review > 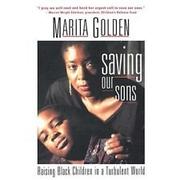 HISTORY
Released: Jan. 10, 1995
SAVING OUR SONS: RAISING BLACK CHILDREN IN A TURBULENT WORLD
by Marita Golden
HISTORY
Released: Jan. 10, 1995
SAVING OUR SONS: RAISING BLACK CHILDREN IN A TURBULENT WORLD
by Marita Golden
A cogently narrated personal exploration of the pain of raising black boys in a society that the author sees as fearing black men and indifferent to their survival. In the face of chilling statistics (the leading cause of death among American black males under 21 is homicide), novelist Golden (Creative Writing/George Mason Univ.; ed. Wild Women Don't Wear No Blues, 1993, etc.) examines her tumultuous experience raising her son, Michael. She begins motherhood in Nigeria, having moved there to be with her Nigerian-born husband, Femi, and his family. But as an educated woman and a feminist, she is unable to reconcile her love of Femi's caring, tribal community with its treatment of women. She also struggles with Femi's own unwillingness to see their marriage as an equal partnership, and after a year she leaves him. After returning to the United States, Golden grapples with the painful realization that, while as a woman her options are much better in the US than in Nigeria, her son's status is far more precarious in her native country. In that context, she explores her decisions to send him away from the violence of Washington, D.C., to a boarding school outside Philadelphia, and to encourage his relationship with his Nigerian father, first through letters and early-morning international phone calls, and eventually through a visit to Africa. Occasionally, Golden descends to easy polemics about race in America, which overwhelms the specificity of her own narrative and her personal experiences of grief and fear. But for the most part, she admirably navigates between the intimate and the sociological. Though her prose is not always engaging or original, Golden brings an articulate and much-needed perspective to the current feminist discourse on raising sons and to the issue of the ``endangered'' black male. Read full book review >

HISTORY
Released: Aug. 1, 1993
WILD WOMEN DON'T WEAR NO BLUES: BLACK WOMEN WRITERS ON LOVE, MEN AND SEX
edited by Marita Golden
HISTORY
Released: Aug. 1, 1993
WILD WOMEN DON'T WEAR NO BLUES: BLACK WOMEN WRITERS ON LOVE, MEN AND SEX
edited by Marita Golden
Fascinating essays (most original) by 15 African-American women of the civil-rights generation on their experiences of love, lust, and a powerful desire for freedom. In the mode of Terry McMillan's female characters speaking candidly to one another, these writers (edited here by novelist Golden: And Do Remember Me, 1992, etc.) share intimate details of- -and frank reflections on—their lives. In the opening piece, ``Tough Boyz and Trouble,'' Washington Post reporter Patricia Gaines interviews teenage girls waiting outside the D.C. city jail to visit their boyfriends; Gaines remembers how, before the days of guns and crack, she, too, briefly found tough boys erotically ``addicting''—until, one summer, her respectable parents had to bail her out of jail. In ``Uses of the Erotic: The Erotic as Power,'' the late poet Audre Lorde urges black women to recognize ``the kernel of the erotic'' within themselves and to expand it regardless of myths and images imposed upon them. In a striking pair of essays on interracial love, Essence magazine editor Audrey Edwards remembers fear, mutual misunderstanding, shared affection, and quite a bit of ``raw, unrelenting sexual pleasure'' in her affairs and relationships with different kinds of white men, and novelist Bebe Moore Campbell reexamines her pain and fury over black men who date and mate with white women. In ``Letting Go With Love,'' teacher Miriam DeCosta-Willis writes about the loss of long-term love and sex with her black husband, while in ``Black Men Do Feel about Love,'' psychotherapist Audrey B. Chapman analyzes the failure of communication between black men and black women as a failure to understand black men's isolation and fear of dependency. Other contributors include Tina McElroy Ansa, Marcia Ann Gillespie, Jewelle Gomez, Sonia Sanchez, and Ntozake Shange. Women on the cutting edge of sexuality, sexual ethics, and the exhilarating art of the personal essay. Read full book review > 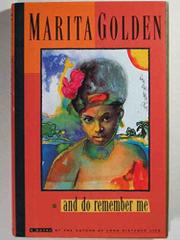 Released: July 1, 1992
AND DO REMEMBER ME
by Marita Golden
Released: July 1, 1992
AND DO REMEMBER ME
by Marita Golden
The author of Long Distance Life (1989), plus other novels dealing with the various odysseys of black women, here centers on a successful actress, a victim of childhood rape, as she struggles to love and endure. Jessie Foster runs away from her Mississippi home and away from the man she's just almost killed—her father. He's repeatedly raped her ever since she was 12, which was also when her ill, silent mother retreated to her bedroom. Activist/writer Lincoln Sturgis picks up Jessie as she stands by the blazing highway, and from there she joins the ``movement people'' at the height of the marches, sit-ins, jailings, and dangerous confrontations of the Civil Rights revolution. Lincoln is a good, kind man, yet when they make love, Jessie is compelled to relive her father's rape in his sick house of secrets. But in spite of the daily peril and a stay in jail, Jessie not only finds her skill and drive as an actress, but she also makes a friend for life—college-educated Macon, married to a professor. Both Jessie and Macon leave the South (and an era). In New York, Jessie changes her name to Pearl Moon and lives with would-be playwright Lincoln. Increasingly, though, there are Pearl's drinking bouts and then another terrible rape, as well as the loss of Lincoln. Macon is also a victim—of callousness and rejection—but she is there for Pearl/Jessie at the long-awaited death of her father. Back in Mississippi, Jessie at last hears the tale of another victim, the one she'd thought had betrayed her—her mother. Now Jessie ``was still lost. But she had found her way home.'' Color this purple with rage at those men who, however driven, rob women of their ability to love and connect, to quash demons within: ``most times [the rape] lay ticking, synchronized and lethal....'' Strong stuff—unsubtle and sharp as an axe blow. Read full book review >