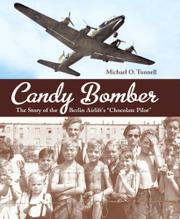 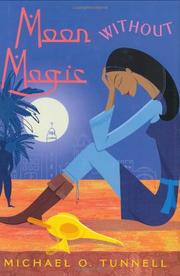 CHILDREN'S
Released: Oct. 1, 2007
MOON WITHOUT MAGIC
by Michael O. Tunnell
CHILDREN'S
Released: Oct. 1, 2007
MOON WITHOUT MAGIC
by Michael O. Tunnell
In this sequel to Wishing Moon (2004), the lamp that was formerly Aladdin's disappears, and its well-meaning keeper, Aminah, discovers that she has become addicted to using its magic. She isn't the only one who's disturbed; it seems that the mercurial Jinni has been left behind, trapped in a mortal body with a split personality. Worse yet, Aladdin's bad-news wife Princess Badr al-Budr has resurfaced, vowing to reclaim the lamp and exact bloody revenge. Once again, Tunnell positively pours on the crises, disasters, quick journeys, showy magic, bandits, exotic locales and clever twists, but rather than recapturing that high-energy Arabian Nights feel, the plot just seems overstuffed and under-steered. Furthermore, his focus on Aminah's inner conflict as she wrestles with her dependence adds a heavily purposeful element—and since her eventual determination to swear off using magic is quickly, once the lamp is recovered, replaced by the conviction that she's wise enough to use it responsibly, the message seems muddled. A disappointing follow-up to a terrific opener, but the premise and characters are still strong enough to carry readers through, and even on to a future episode or two. (Fantasy. 11-13)Read full book review > 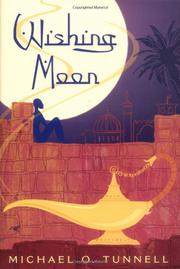 WISHING MOON
by Michael O. Tunnell
In this captivating original sequel to Aladdin, the genie gets a real workout when its lamp falls into the hands of an orphaned street child. Fourteen-year-old Aminah's bleak future takes a wild turn for the better when an old lamp sails out of the palace window and hits her on the head. But rather than use her wishes to live in splendor or to punish enemies, Aminah flummoxes the genie by searching out decent-hearted people engaged in helping the poor and endowing them with magical abilities. Predictably, the petulant, mercurial genie—who tends to show anger by spitting snakes, or blowing up its own head—steals the show, but Aminah puts in a sturdy performance too, as an idealistic but not entirely naïve do-gooder with a temper of her own, and plenty of gumption. Modern sounding dialogue—"I wish you'd settle down!"—and the genie's breezily cryptic references to pizza, New York, and other items from Aminah's future give the tale a contemporary tone without spoiling the Arabian Nights flavor. Tunnell adds suspense with a subplot involving the efforts of Aladdin's evil wife to recover the lamp, and closes with a perfectly executed twist. (Fiction. 11-15)Read full book review > 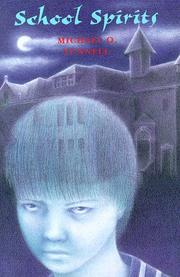 CHILDREN'S
Released: Dec. 15, 1997
SCHOOL SPIRITS
by Michael O. Tunnell
CHILDREN'S
Released: Dec. 15, 1997
SCHOOL SPIRITS
by Michael O. Tunnell
In 1958, Patrick is new in town, where his father is taking over the principalship of a school that looks ``like Dracula's castle.'' In the school library Patrick discovers the ghost of Barnaby (nicknamed Barney), the young son of a former principal, who mysteriously disappeared in 1920. With the help of new friend Nairen and town bully Marion, as well as some supernatural manipulation by Barnaby, Patrick finds out what happened to the ghost and settles his unquiet spirit. Barnaby's rather gruesome death and Patrick's testy relationship with his consistently obstructive father are jarringly serious elements in an otherwise lightly spooky chiller. The mystery, with a few standard red herrings and some obvious telegraphing, will appeal to fans of mild horror, and the ending hints at a sequel, if not a series. (Fiction. 8-12) Read full book review >

CHILDREN'S
Released: Sept. 1, 1997
MAILING MAY
by Michael O. Tunnell, illustrated by Ted Rand
CHILDREN'S
Released: Sept. 1, 1997
MAILING MAY
by Michael O. Tunnell, illustrated by Ted Rand
Based on a true story is this old-fashioned account from Tunnell (with George W. Chilcoat, The Children of Topaz, 1996, etc.), about five-year-old May's railroad journey via parcel post across the rugged Idaho mountains to visit her grandmother. Unable to purchase a first-class train ticket, May has 53õ in stamps glued to the back of her coat and joins the packages and letters in the mail car. Even a cranky old conductor cannot deter May from making it to Grandma Mary's for lunch. A little-known detail in the history of the postal service inspired this 1914 period piece, and while children may wish for more suspense, the matter-of-fact telling is sure to bring quiet smiles as understanding dawns. Rand's illustrations of homey, wood-grained, braided-rug interiors and bundled-up wintry scenes bring warmth to the narrative; sepia-toned illustrations mimicking old photographs add to the notion of the book as part story, part historical record, while a photograph of the real Charlotte May Pierstorff appears on the jacket. (Picture book. 5-8) Read full book review > 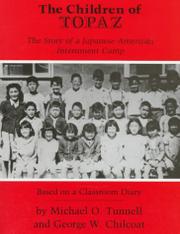 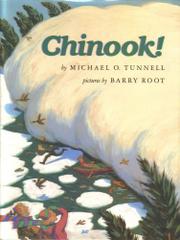 CHILDREN'S
Released: March 24, 1993
CHINOOK!
by Michael O. Tunnell, illustrated by Barry Root
CHILDREN'S
Released: March 24, 1993
CHINOOK!
by Michael O. Tunnell, illustrated by Barry Root
A children's literature professor, reared in Alberta, makes a fine picture-book debut with some nicely understated tall tales about the warm, dry wind that sweeps down from the Rockies' eastern slopes. The stories are told by old Andrew Delaney McFadden, who's out ice-fishing when he hustles two skating children into his rowboat and gives them gives an urgent warning: back in 1888, when ``it was as cold as a snake's kiss,'' a chinook not only melted the ice faster than horses could gallop but left him floundering in dangerously hot water (hence the boat). Old Andy regales the kids with several more delightfully exaggerated ``experiences'' before sending them on their way with the admission that he may worry too much—``If a [chinook] comes, I'll row like the dickens and pick you out of the water.'' Root's sweeping brush strokes, affectionate caricatures, and sly humor are right in the spirit of the entertaining story. (Picture book. 4-9) Read full book review >