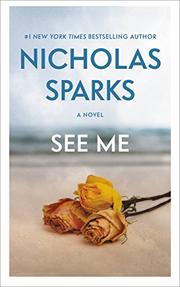 FICTION & LITERATURE
Released: Oct. 13, 2015
Reviewed: Oct. 1, 2015
SEE ME
by Nicholas Sparks
FICTION & LITERATURE
Released: Oct. 13, 2015
SEE ME
by Nicholas Sparks
"More of the same: Sparks has his recipe, and not a bit of it is missing here. It's the literary equivalent of high fructose corn syrup, stickily sweet but irresistible."
Sparks (The Longest Ride, 2013, etc.) serves up another heaping helping of sentimental Southern bodice-rippage. Read full book review > 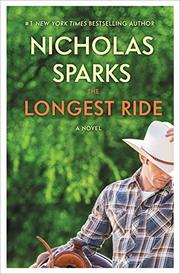 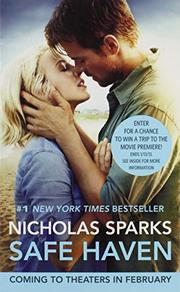 Released: Sept. 14, 2010
Reviewed: Feb. 4, 2013
SAFE HAVEN
by Nicholas Sparks
Released: Sept. 14, 2010
SAFE HAVEN
by Nicholas Sparks
"An emotionally wrenching story with a dramatic happily-ever-after."
A young woman with secrets finds home, community and a potential new love in a small North Carolina beach town; now if she can only rid herself of a past that haunts her, she may just have the life she's always longed for. Read full book review > 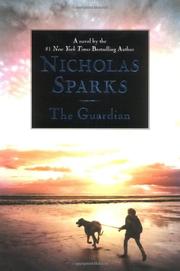 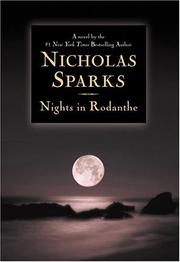 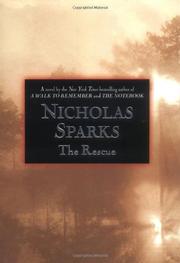 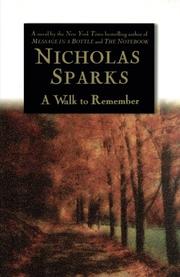 FICTION & LITERATURE
Released: Oct. 7, 1999
A WALK TO REMEMBER
by Nicholas Sparks
FICTION & LITERATURE
Released: Oct. 7, 1999
A WALK TO REMEMBER
by Nicholas Sparks
Sparks (The Notebook, 1996; Message in a Bottle, 1998) carries on in his determined effort to make people cry, this time with an old premise, slow windup, and wobbly pitch. In 1958, high-school senior Landon Carter is 17. Even though his father is a US Congressman, Landon's best friends are on the taunting, swaggering side—football players and such, who hang around at the local drive-in and flaunt their disrespect. So it's strange indeed when Landon gets involved with the nicest girl in town—classmate Jamie Sullivan, who carries a Bible everywhere she goes, does endless good deeds, and is the only child of the widowed Rev. Hegbert Sullivan, the churchman whom Landon and gang love to throw taunts after from hiding places behind trees. But Landon has enrolled in a drama class (for the easy A), and that class is responsible for putting on the annual Christmas play, written by Hegbert, which will be special this year because the author's beloved daughter will have the female lead'she's an angel who ministers to a sorrow-filled widower. When Jamie asks Landon if he won—t please be the male lead, what can he say? And what can he do, as rehearsals go on, when he starts not only respecting Jamie, but liking her? Embarrassing as it is before his friends, Landon starts helping her do good deeds, and, on performance night, seeing her true beauty for the first time, falls in love with her. Oh, say it isn—t so'since great, deep sorrow lies ahead. For Jamie has a secret that, when she tells it to her loving Landon, explains everything—the Bible she carries, new meanings in the Christmas play, even Jamie's reasons for finding it really special this year. Sparks pulls out all the stops as Landon, from a vantage of 40 years later, tells the story out to its teary end. Weepy wisdom aimed at the holiday trade. Read full book review > 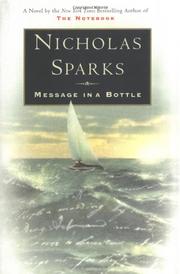 FICTION & LITERATURE
Released: April 7, 1998
MESSAGE IN A BOTTLE
by Nicholas Sparks
FICTION & LITERATURE
Released: April 7, 1998
MESSAGE IN A BOTTLE
by Nicholas Sparks
Famous from the best-sellerdom of The Notebook (1996), Sparks sails again into the waters of many tears—though this time, thanks to fewness of charms in the writing and diminished reason to suspend disbelief, Kleenex sales are likely to remain stable. Boston Times columnist Theresa Osborne finds a bottle on the Cape Cod beach where she's vacationing. Inside? Well, a letter from one love-lorn —Garrett— to a sadly missed —Catherine.— Reading it brings the not-long-ago divorced Theresa Osborne to tears, though others may have their own responses (—I miss you, my darling, as I always do, but today is especially hard because the ocean has been singing to me. . . —). Theresa runs the letter in her Times column (though her beat is really parenting), and, remarkably (—But what did it all mean?—), another Garrett-Catherine letter surfaces, in the possession of a Norfolk, Virginia, reader of the column. Suffice it so say (—I think of you, I dream of you, I conjure you up when I need you most—), especially after a third letter comes to light, Theresa really wants to meet Garrett. So after little detective work she flies to Wrightsville Beach, North Carolina, visits the docks (—She stepped out of her car, brushed the hair from her face, and started toward the entrance—), boards Garrett's sailing boat, the Happenstance, and meets the remarkable Garrett himself (—There was something mysterious and different about the way he acted, something masculine—). An evening sail, some more hair-tossing, and a new romance is well underway—though the question remains whether Garrett can free himself from his grief and love for the tragically dead Catherine, his wife of nine years. Telling wouldn—t be fair, though Theresa says at one point: "I love you, too, Garrett. But sometimes love isn—t enough." Prizes: Worst writing: Garrett's letters. Best scene: storm at sea. Most unbelievable scene: same storm at sea. Worst example of. . . . But enough already. (First printing of 750,000; film rights to Warner Bros.) Read full book review > 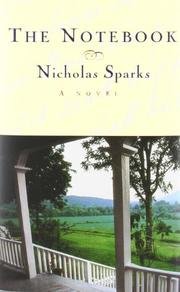 FICTION & LITERATURE
Released: Oct. 11, 1996
THE NOTEBOOK
by Nicholas Sparks
FICTION & LITERATURE
Released: Oct. 11, 1996
THE NOTEBOOK
by Nicholas Sparks
Sparks's debut is a contender in the Robert Waller book-sweeps for most shamelessly sentimental love story, with honorable mention for highest octane schmaltz throughout an extended narrative. New Bern is the Carolina town where local boy Noah Calhoun and visitor Allison Nelson fall in love, in 1932, when Noah is 17 and Allie 15 (``as he . . . met those striking emerald eyes, he knew . . . she was the one he could spend the rest of his life looking for but never find again''). Allie's socially prominent mom, however, sees their Romeo-and-Juliet affair differently, intercepting Noah's heartrendingly poetic love-letters, while Allie, sure he doesn't love her, never even sends hers. Love is forever, though, and in 1946 Allie sees a piece in the paper about Noah (he's back home after WW II, still alone, living in a 200-year-old house in the country) and drives down to see him, telling the socially prominent lawyer she's engaged to that she's gone looking for antiques (`` `And here it will end, one way or the other,' she whispered''). And together again the lovers come indeed, during a thunderstorm, before a crackling fire, leaving the poetic Noah to reflect that ``to him, the evening would be remembered as one of the most special times he had ever had.'' So, will Allie marry her lawyer? Will Noah live out his life alone, rocking on his porch, paddling up the creek, ``playing his guitar for beavers and geese and wild blue herons''? Suffice it to say that love will go on, somehow, for 140 more pages, readers will find out what the title means and may or may not agree with Allie, of Noah: ``You are the most forgiving and peaceful man I know. God is with you, He must be, for you are the closest thing to an angel that I've ever met.'' An epic of treacle, an ocean of tears, made possible by a perfect, ideal, unalloyed absence of humor. Destined, positively, for success. (First serial to Good Housekeeping; film rights to New Line Cinema; Literary Guild selection) Read full book review >