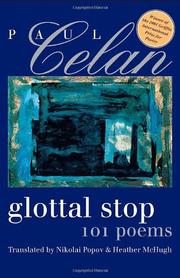 Released: Nov. 3, 2000
GLOTTAL STOP: 101 POEMS
by Paul Celan, translated by Nikolai Popov, Heather McHugh
Released: Nov. 3, 2000
GLOTTAL STOP: 101 POEMS
by Paul Celan, translated by Nikolai Popov, Heather McHugh
"A good beginning for anyone unfamiliar with Celan: Popov and McHugh de-emphasize literal translation in an attempt to capture the spirit of his work."
Celan is considered a key postwar poet because of his radical method of creating meaning by breaking the conventions of language. His admirers generally share a love for challenging poetry and an ability to read his notoriously demanding work in their original German. The husband-and-wife team of translator Popov (Because the Sea Is Black) and poet McHugh (Broken English) have tackled the daunting task of capturing Celan's poetic spirit by balancing fidelity to the poems' text with a faithful reproduction of his signature techniques. Their translations, like Celan's German poems, break the bonds of conventional syntax and fuse syllables together to produce groupings of images that resonate with meaning. If the message behind these resonances is often difficult to discern, it must be admitted nevertheless that the format is startling in its strange originality and commands attention even when it seems beyond comprehension. Popov and McHugh supplement their translations with the textual notes and an introduction that offers a good insight into the structure and aims of Celan's verse. Read full book review > 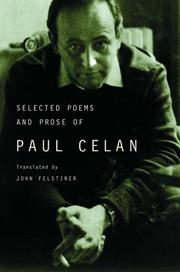 Released: Nov. 1, 2000
SELECTED POEMS AND PROSE OF PAUL CELAN
by Paul Celan, translated by John Felstiner
Released: Nov. 1, 2000
SELECTED POEMS AND PROSE OF PAUL CELAN
by Paul Celan, translated by John Felstiner
"A very clear rendering of a notoriously difficult poet."
Celan makes for difficult reading (Glottal Stop, see above). But he justifies the obduracy of his verse by pointing out the danger inherent to any dealing with language: "It had to pass through it's own answerlessness, pass through frightful muting, pass through the thousand darknesses of deathbringing speech." Felstiner succeeds admirably in taking this thought seriously, and his translations give equal attention to the silences and empty spaces that haunt the exacting language of these pieces. The poetry itself begins in snow, death, and darkness; Celan's early work interrogates the death of his parents at Nazi hands and seeks compensation in discovering what he later called "an addressable Thou . . . an addressable reality." His final poems, which become progressively more hermetic and disjunctive, enact a minimalism that makes Dickinson look Dickensian by comparison (and Celan was an accomplished translator of Amherst's Muse). The late series of poems that he wrote after his visit to Israel in 1969 are particularly interesting, as they stage the interaction between an intensely personal and highly oblique aesthetic with the brute political realities of a nation at war, when slogans threaten to drown out all lyrics. Though Felstiner is a scrupulous translator, he eschews the pedantry of always favoring accuracy over (his best guess at) intent. His translation of Celan's most famous work ("Deathfugue") is carefully experimental: taking a cue from the musical reference in the title, Felstiner intertwines his translation with the original German. A subtle progression of substitutions changes the poem's leitmotif ("Death is a master from Deutschland") back into Celan's own ("der Tod ist ein Meister aus Deutschland"). The mingling of voices is a nice metaphor for translation, and also provides a standard that Felstiner, at his best, achieves.Read full book review > 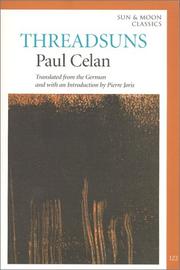 Released: Sept. 25, 2000
THREADSUNS
by Paul Celan, translated by Pierre Joris
Released: Sept. 25, 2000
THREADSUNS
by Paul Celan, translated by Pierre Joris
"While we await the critical and fully annotated edition of Celan's verse, this collection helpfully deepens his mystery."
Celan is commonly regarded as the most important poet to write in German since Rilke, but many of his poems remain untranslated and very few are known by English readers. Many lines of Celan sound like uncanny echoes of Heiddegger: "Undebecome, everywhere / gather yourself, / stand." Even the translator admits of the poems that "their readability is still an issue." And not only because of the complex philosophy they enact, but because many are autobiographical in nature, referencing specific times, places, and people. Footnotes, which all editors and translators of Celan agree are necessary supplements, are sparse here: they are offered "more as a map of our ignorance than as a showcase for our knowledge." Once the difficulties of the project are acknowledged, any reader of Celan will be happy to have this competent translation (with facing German text) of an important late collection. The comparative lyricism and directness of Celan's early verse gave way, in the mid-1960s, to the leaner, more obdurate music of his late style. The poems are full of compound nouns (the jawbreaking "verse-fibula-yoke" is a translation of "Versspangen-Joch"), neologisms, and radical disjunctures of prosody. Joris's valiant efforts to render Celan into readable and adequately inventive English are not as elegant as Michael Hamburger's (Celan's most gifted translator), but they do occasionally manage to strike very close to what Celan suggestively calls "the missing target": "You, too, with all / the instrangedness in you, / instrange yourself, / deeper, / the One / string / tenses its pain below you, / the missing target / radiates, bow." Read full book review >

BIOGRAPHY & MEMOIR
Released: Aug. 1, 1995
CORRESPONDENCE
by Paul Celan, Nelly Sachs
BIOGRAPHY & MEMOIR
Released: Aug. 1, 1995
CORRESPONDENCE
by Paul Celan, Nelly Sachs
A slender but important volume of nearly all the letters that passed between Nelly Sachs, a Nobel laureate in literature, and Paul Celan, one of the greatest poets of this century. Celan (19201970) and Sachs (18911970) were united by shared experiences and temperaments. Both were only children, German- speaking Jews whose lives had been shattered by the rise of Hitler. Both were poets, writing in German as a conscious act of refusal to capitulate to the Nazi terror by reclaiming the language as their own. The Rumanian-born Celan lost both his parents in the death camps and spent much of the war in forced labor; after the war he fled the wave of Communism sweeping through his country, eventually settling in Paris. Sachs was somewhat more fortunate, fleeing with her ailing mother to Sweden just before the war began. As this collection of their correspondence indicates, each was a sensitive person who bore the scars of the Nazi era with a stoicism that ultimately led to nervous breakdowns and, in Celan's case, suicide. Their 16-year-long correspondence has, as Celan biographer John Felstiner points out in his helpful introduction, ``a dynamic of [its] own: a tenderness, a certain desperate fellow-feeling of real survivorhood.'' In their letters, particularly those from Sachs following a breakdown and lengthy hospitalization, one senses the desperate fight being waged against solitude and the terrors of darkness. Often, though, another, gentler tone breaks through. A letter from Celan, written during a Brittany vacation, reveals a doting and proud father with a gentle wit. Sachs displays an almost grandmotherly attitude toward Celan's young son, Eric. The book is aided immeasurably by a set of very thorough notes and a chronology of the lives of the two poets. Poignant reading and an absolute must for anyone interested in 20th century literature or the effects of the Holocaust on those it touched. Read full book review >