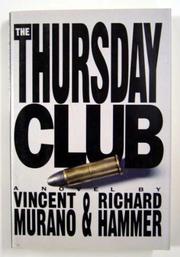 MYSTERY THRILLER
Released: Nov. 1, 1992
THE THURSDAY CLUB
by Vincent Murano, Richard Hammer
MYSTERY THRILLER
Released: Nov. 1, 1992
THE THURSDAY CLUB
by Vincent Murano, Richard Hammer
Routine NYPD conspiracy-thriller that should have been better, considering Murano's years as an NYPD Internal Affairs detective (Cop Hunter, 1990) and Hammer's credits as a true-crime (Beyond Obsession, p. 93) and fiction writer (Dance Down the Mountain). The authors spring a nice little surprise up-front, when veteran homicide cop Felix Palmieri, who looks to be the story's hero through his investigation of several cases—including the murders of a black hooker, a top mobster, and an Arab diplomat—is himself gunned down in a dark alley. The remainder of the story, though, is clichÇ-driven, beginning with Ben Rogers, Palmieri's protÇgÇ, a steadfast Internal Affairs cop determined to track down Palmieri's killer by sifting through Palmieri's last cases—even as he's asked by the newly elected mayor to look into charges of corruption against financier Eugene Donatello, a prospective deputy mayor. Rogers's diggings soon draw unwanted fire—an attempted hit- and-run; a vague hands-off warning by curiously amenable mob-boss Generoso Ruggieri; the vicious murder of a snitch. It's unclear to Rogers which act ties to which case, although he neatly solves one puzzle, the drug-related murder of a nurse. Meanwhile, his investigation of Donatello brings the cop up against the Thursday Club, a powerful cabal composed of Donatello, a beloved top cop, a respected bishop, and others—and when Rogers uncovers proof of the Club's involvement in insider-trading and in a 25-year-old murder, tying most of Palmieri's cases together, the Club and its as-yet unidentified (though obvious) chief go after Rogers, who finally must turn for help—with a twisty payoff—to the enigmatic Ruggieri. Armchair cops will nail the villains way before the hero does; but the real let-down is the authors' failure to tap fully into Murano's background: Their NYPD/municipal power-plays are pure pulp, and their city streets have as much depth as a studio backlot. Read full book review > 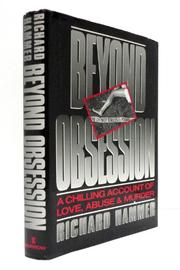 NON-FICTION
Released: March 23, 1992
BEYOND OBSESSION
by Richard Hammer
NON-FICTION
Released: March 23, 1992
BEYOND OBSESSION
by Richard Hammer
From Hammer (The Helmsleys, 1990; The CBS Murders, 1987, etc.), a scrupulously detailed account of a teenaged girl, her boyfriend, and the murder of her mother. Joyce Aparo was everything a murder victim shouldn't be: popular with her co-workers, known by everyone in her hometown of Glastonbury, Connecticut, and a highly competent career woman. She was also, secretly, everything a parent shouldn't be. She beat her only child, Karin, from the time the girl was three; forbade her to play with other children; forced her to dress as a miniature version of herself; and insisted she was a violin prodigy (during one recital, Aparo ran on stage screaming at Karin and dragged her off). Karin grew up with bulimia, anorexia nervosa, a suicide attempt, and post-traumatic stress syndrome. At 16, she met Dennis Coleman, 18—tall and red-haired with a splash of freckles, IQ 137, well bred and well spoken. After a few dates, the two were making love every chance they got, planning a honeymoon in Vienna, and progressing to sex with handcuffs and dildos. Coleman became completely obsessed with Karin, writing her every day (even when he saw her) and worshiping at ``my Karin shrine''—photos, flowers, and memorabilia of Karin covering every wall of his bedroom. Did they plot together to kill Joyce Aparo? (Karin had already tried to give her mother an overdose of Seconal.) Was Coleman acting on his own, as Karin maintained from the day she was arrested? Or was Coleman so compelled by passion that he could not resist anything Karin asked? How he came to strangle Joyce Aparo and the part that Karin played in the murder form the tangled plexus here. Hammer provides meticulous research—extensive diary entries, correspondence, psychiatric profiles, and verbatim trial testimony—in producing a solid but slowly paced and grim illustration that ``violent loves have violent ends.'' Not for sensitive souls. (Eight pages of b&w photos—not seen.) Read full book review >