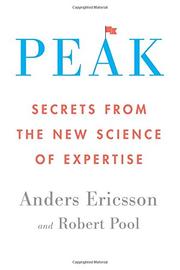 NON-FICTION
Released: April 27, 1994
EVE'S RIB: SEARCHING FOR THE BIOLOGICAL ROOTS OF SEX DIFFERENCES
by Robert Pool
NON-FICTION
Released: April 27, 1994
EVE'S RIB: SEARCHING FOR THE BIOLOGICAL ROOTS OF SEX DIFFERENCES
by Robert Pool
Through shrewdly selected examples and engaging interviews with researchers, science journalist Pool (Science, Discover, Nature, etc.) assembles a convincing argument to explain the biological basis of sexual differences. Wisely limiting himself, Pool considers the role of hormones in prenatal development: While all fetuses begin as female, the male is differentiated by an infusion of testosterone that alters both the structure of the brain and its function. For biological reasons, then, he claims, boys really do prefer trucks and girls dolls. Boys have a better spatial sense, stronger competitive instincts, and a preference for objects, whereas girls demonstrate greater verbal ability, a more cooperative nature, and an interest in people. Moreover, faced with the same problems, boys and girls use different parts of the brain to solve them and at different speeds: While both can get out of a maze, girls look for landmarks but boys prefer maps. Physiologically, while the male brain is larger, it is not necessarily superior. Of course, there are variations: girls with excess testosterone; boys with excess estrogen; chemicals such as DES that effect pregnancies; and changes in the hormone levels throughout life. All of these biological events, according to Pool, influence behavior far more than the socialization process to which feminists especially have attributed the sexual stereotypes that they want to overturn. Ironically, it was women, often feminists, who made the discoveries about the biological bases of sexual differences. In a speculative chapter, Pool concludes that these differences evolved to suit a more primitive culture and are no longer relevant or useful. A convincing and optimistic study promoting the advantages of difference, the futility of influencing the environment of young children to produce people who are the same but not necessarily equal. Pool captures the resourcefulness of the researchers, the voices of those who made the discoveries and tested them in their own lives. Read full book review >