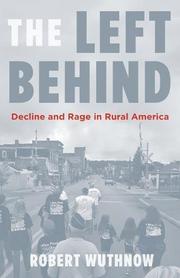 THE LEFT BEHIND: DECLINE AND RAGE IN RURAL AMERICA
by Robert Wuthnow
Released: March 1, 2018 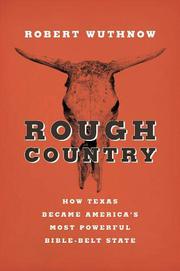 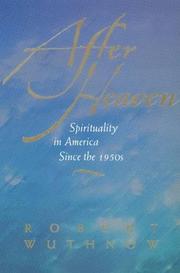 NON-FICTION
Released: Oct. 1, 1998
AFTER HEAVEN: SPIRITUALITY IN AMERICA SINCE THE 1950S
by Robert Wuthnow
NON-FICTION
Released: Oct. 1, 1998
AFTER HEAVEN: SPIRITUALITY IN AMERICA SINCE THE 1950S
by Robert Wuthnow
A stirring, eloquent commentary on contemporary Americans— spiritual condition. Why do millions of Americans claim they are spiritual but not religious? This contemplative interpretation by leading sociologist of religion Wuthnow (Sociology/Princeton; God and Mammon in America, 1994, etc.) postulates that while the 1950s and earlier eras promoted a spirituality of dwelling (tied to a particular place of worship and to the family), the post-1960s era has emphasized one of seeking. The religious journey has become somehow more important than actually arriving (or staying) in any one place. It's not just that Americans no longer opt for longtime commitment to religious institutions; it's a fundamental paradigm shift proclaiming that the individual spiritual quest is more meaningful than religious community, and that Americans now understand the sacred to abide in themselves, not in traditional establishments. If all this smacks of the '60s, it's with good reason: one of the most cogent arguments of this book is that the legacy of the '60s has profoundly affected not only the immediate participants in the upheavals of that decade, but all Americans. In the 1990s, for example, we see the ephemeral seeker of spirituality of the '60s come to a logical conclusion in our cultural obsession with angels: when angels visit, they don—t demand that we go to church, make lasting spiritual commitments, or change our behavior in any way. Such encounters are brief, subjective, and almost always therapeutic, like '90s spirituality. Wuthnow shows that, as God has become less immediately a part of our cultural —geography,— we rely more heavily on friendly intermediaries. Angels thus demonstrate the anxieties many Americans have about God, not an upsurge in new religious sentiment. Occasionally preachy (especially about why Reagan was the perfect symbol of the shallow spirituality of the '80s), but always subtly perceptive, this is essential reading for anyone wishing to understand noninstitutional religion in America. Read full book review > 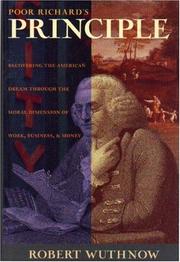 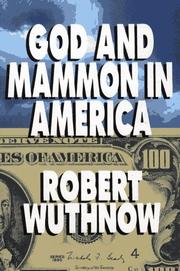 NON-FICTION
Released: Sept. 21, 1994
GOD AND MAMMON IN AMERICA
by Robert Wuthnow
NON-FICTION
Released: Sept. 21, 1994
GOD AND MAMMON IN AMERICA
by Robert Wuthnow
An interesting but inconclusive look at the relationship between religion and money in contemporary America. Wuthnow (Social Sciences/Princeton; Sharing the Journey, p. 59, etc.) asks: What is the effect of religious belief on economic choices? Jesus cautioned that a person could not serve two masters- -both God and money. Yet, according to Wuthnow, that is precisely what many American synagogue- and churchgoers and professed believers are attempting to do. In the postindustrial era, people are working more hours than ever before and, under tremendous pressure to perform and gain ever more material goods, enjoying it less. What impact does religion have? Does it affect the careers people choose? Very little, according to the author, who bases his work on a wide variety of sources (including surveys and interviews). What religion might do, however, is make people happier on the job. It also influences workplace ethics, helping to determine whether one will be honest or willing to cut corners. Statistical comparisons of people of various moral stances, and of churchgoers to the population at large, also indicate that religious commitment influences people's attitudes toward money (showing it is as much the province of priest and rabbi as it is of economist and businessman), charitable giving, environmental consciousness, and opinions and actions concerning the economically disadvantaged. In the end, Wuthnow's answers are all mixed bags, demonstrating that Americans are at once deeply spiritual and profoundly secular. He also criticizes current religious leadership for reshaping modern religion so as to not afflict the consciences of their consumerist, capitalist congregants. Appendices on methodology will be helpful to serious students. Straightforwardly written in accessible prose, the book will appeal primarily to students and scholars of religion. There is, however, enough to attract the interested layperson as well. Read full book review > 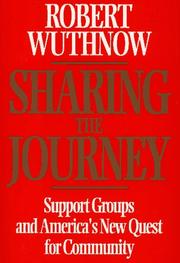 NON-FICTION
Released: March 3, 1994
SHARING THE JOURNEY: SUPPORT GROUPS AND AMERICA'S NEW QUEST FOR COMMUNITY
by Robert Wuthnow
NON-FICTION
Released: March 3, 1994
SHARING THE JOURNEY: SUPPORT GROUPS AND AMERICA'S NEW QUEST FOR COMMUNITY
by Robert Wuthnow
Forty percent of all Americans meet regularly in support groups such as AA or Bible Study. Princeton's chronicler of religious life Wuthnow (Christianity in the Twenty-first Century, Acts of Compassion) interviews 1,000 support-group members to find out why—and comes up with some intriguing conclusions in this thoughtful, well-written work. Most Americans, Wuthnow claims, lead lives not of quiet desperation but of turbulent upheaval; the average family moves at least once every three years, and half of those families are ripped apart by divorce. Many people—like 26-year-old mother-of-two Karen, whose parents divorced and remarried while she was still in high school, who has herself changed jobs 6 times and moved 11 times in the past 12 years—look to small groups (Karen belongs to a women's Bible Study group that meets once a week) to provide a sense of family and community. But while support groups can be many things to many people—helping members become more spiritually disciplined, building self-esteem, and providing forums for the narration of individual stories—such groups are no substitute for the multi-textured ties that families create over decades in the dailiness of private life. Nor, posits Wuthnow, can support groups be expected to eliminate crime and poverty, create jobs, recast foreign policy, or reduce the national debt. Still, these gatherings—many take place in church basements—are clearly one of the most vital forces in American ecclesiastical life; in fact, the traditional Sunday morning churchgoer may well be replaced by the Monday or Wednesday evening support-group member. Sensitive, well-reasoned, and insightful—with valuable commentary on the much-maligned ``culture of victimhood.'' Read full book review > 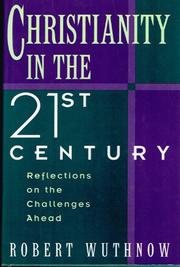 NON-FICTION
Released: April 1, 1993
CHRISTIANITY IN THE TWENTY-FIRST CENTURY: REFLECTIONS ON THE CHALLENGES AHEAD
by Robert Wuthnow
NON-FICTION
Released: April 1, 1993
CHRISTIANITY IN THE TWENTY-FIRST CENTURY: REFLECTIONS ON THE CHALLENGES AHEAD
by Robert Wuthnow
Wuthnow (Social Sciences/Princeton), usually an elegant chronicler of social trends (Acts of Compassion, 1991, etc.), stumbles with this dull look at the future of the church. Part of the problem is Wuthnow's too-narrow focus. Instead of fulfilling the title's promise, he writes almost exclusively about American Protestantism, which represents only a small segment of Christianity; moreover, within this limited range, he spends much of his time clucking over the collapse of liberal churches (with which he identifies) and the groundswell of fundamentalism. His predictions seem on target, perhaps because they're unsurprising: Fundamentalism will move away from televangelism toward decentralized, social-oriented service (as Jerry Falwell has already done); American youth will suffer from a lack of decent role models, with cartoon superheroes taking the place once reserved for the local pastor; Christian denominations will continue to proliferate, with worshippers hopping between various churches; Christianity as a whole must continue to find its strength in community. These prophecies are scattered throughout the book, as are several intriguing themes that, more clearly presented, might have made compelling studies on their own: One is the importance of narrative in shaping our religious and ethical lives; another is the way in which liberal analysts—Wuthnow singles out Bishop John Spong—have misread fundamentalism, which the author sees as a ``dynamic process'' with its own ``cultural capital'' rather than as simply a reaction to modernity. In the course of his research, Wuthnow interviewed numerous church members and ministers; their comments add color to the discussion, but do little to overcome the overall vagueness. A very cloudy crystal ball. Read full book review > 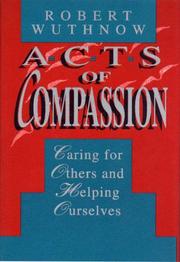 HISTORY
Released: Oct. 1, 1991
ACTS OF COMPASSION: CARING FOR OTHERS AND HELPING OURSELVES
by Robert Wuthnow
HISTORY
Released: Oct. 1, 1991
ACTS OF COMPASSION: CARING FOR OTHERS AND HELPING OURSELVES
by Robert Wuthnow
Why do Americans collectively devote 20 billion hours of their time each year to helping others? To find out, Wuthnow (Sociology/Princeton; The Restructuring of American Religion, 1988) surveyed 2110 adults across the land, many of whom provided in- depth interviews; he presents his conclusions in this penetrative, well-written work. Americans, explains Wuthnow, are instinctively uneasy about describing exactly why they perform good deeds. He helps to clarify their motivations with a deft narrative that weaves together the stories of very different types of good Samaritans—from the rescue-squad worker with his ``iceman'' approach to helping others, to the pediatric cardiologist who combines professionalism and empathy as she deals with the bereaved parents of babies she's lost, to the Presbyterian missionary who's inspired by evangelical fervor. Each subject is willing to work through a plurality of motivations to get to the bottom of his or her desire to do good because, according to Wuthnow, ``Motive-talk provides connections with our cultural heritage. It associates us with the various values we have been taught to accord prominence.'' In each case, Wuthnow uncovers a need to reconcile individuality—which he sees as a defining American cultural value—with altruism. The author finds that most Americans, even liberal clerics, prefer to describe their impulse to help others in terms of self-fulfillment rather than theology, and that most ``situationalize'' their stories, focusing on individuals rather than on principles. In spite of what Wuthnow sees as a tendency of Americans to set limits on their caring, a striking 31 percent, he reveals, are involved in ``charity or social-service activities, such as helping the poor, the sick, or the elderly.'' Elegant, illuminating, and of significant interest in this decade of need and limits. Read full book review >