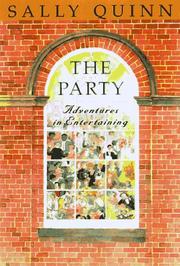 NON-FICTION
Released: Nov. 5, 1997
THE PARTY: A GUIDE TO ADVENTUROUS ENTERTAINING
by Sally Quinn
NON-FICTION
Released: Nov. 5, 1997
THE PARTY: A GUIDE TO ADVENTUROUS ENTERTAINING
by Sally Quinn
Trite, trivial, and tasteless describe this unrewarding effort of a society reporter, novelist, and ``sometime Washington hostess.'' That latter label horrified Quinn (Happy Endings, 1991) when she heard it aplied to her on Good Morning America. She was, after all, a ``serious journalist,'' and ``hostess'' was synonymous with ``frivolous'' in her view. She was, alas, somehow persuaded otherwise. Quinn has organized a book about giving parties that begins with a credible mantra from her party-giving parents: ``A guest can do no wrong.'' It's downhill from there. Names—from the Clintons to Princess Margaret, Henry Kissinger to Lauren Bacall, and Washington pundits too numerous to mention or remember—are scattered profusely, but many of the anecdotes are pointless and without context. One secret of legendary hostess Perle Mesta's success, she tells us, was to hang a lamb chop in her window to signal a party—but why? Perhaps lamb chops have a kinky sexual connotation not revealed here. More likely, it was WW II and meat was rationed, making lamb chops a surefire lure for partygoers. No hint of that historic motive from Quinn, whose party success meter seems to be how many guests ``in black tie and . . . evening gowns were reclining all over the living room floor giggling.'' Moreover, in a chapter alluringly titled ``The Booze,'' her vaunted motto regarding the immunity of guests stops short at large cocktail parties, where she refuses to serve red wine because ``people spill,'' and coffee after dinner, because ``it kills the party''—presumably sobering everyone up. Other chapters deal equally improbably with table settings, entertainment after the meal, and where to have the party. Beginning and ending chapters are titled ``The Point'' and ``The Point (Again),'' but Quinn seems to have missed it both times. Go to Miss Manners for a useful guide to party giving or to almost any celebrity bio for better anecdotes about parties-I- have-known. (b&w illustrations) Read full book review > 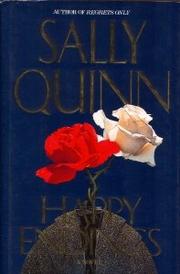 Released: Nov. 27, 1991
HAPPY ENDINGS
by Sally Quinn
Released: Nov. 27, 1991
HAPPY ENDINGS
by Sally Quinn
Journalist/author Quinn's sequel to Regrets Only (1986) may actually outperform its predecessor in tedium and sheer unpleasantness, as two high-profile Washington women fight it out in the name of love. Allison Sterling—the beautiful and neurotically confrontational newspaper reporter last seen weeping over the affair between her former lover, Des Shaw, Washington Bureau Chief of The Weekly, and Sadie Grey, southern-belle wife of the US President—returns to Washington from a two-year assignment in London to find the President assassinated, Des and Sadie broken up, and an irresistible offer waiting for her to take over the editorship of her paper's National division. Sterling wastes little time exchanging tears over the President with fellow journalists before she throws herself into her new job and takes up with Des again, despite her fear that Sadie may once again sink her talons into his meaty Irish flesh. She must have forgotten that the widow Sadie spurns single men; soon after the President's death, Sadie sets her sights on the married director of an AIDS research facility. When the good doctor fails to respond wholeheartedly, however, the former First Lady is forced to resort to Des, who, having married Allison, has become fair game. Sadie's confession that Des, not the late President, is the father of her youngest child secures Des's guilt-ridden presence in her bed—while Quinn tosses in such character-building plot devices as the death of Allison's newborn, a near-fatal accident for Sadie's son, an AIDS diagnosis for the current President, and the appearance of several Colombian drug dealers who threaten to murder nearly everyone in sight. Sadie and Allison may indeed grow wise enough to settle down with the appropriate partners. But readers are likely to side with the dealers. Laborious, stilted, and—perhaps worst of all—fantastically unsexy. (Literary Guild Dual Selection for Winter) Read full book review >