Sebastian Faulks is best known for his French trilogy, The Girl at the Lion d’Or, Birdsong and Charlotte Gray. He has also worked extensively as a journalist. 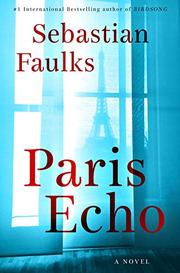 FICTION & LITERATURE
Released: Nov. 6, 2018
Reviewed: Sept. 2, 2018
PARIS ECHO
by Sebastian Faulks
FICTION & LITERATURE
Released: Nov. 6, 2018
PARIS ECHO
by Sebastian Faulks
"A fun romp through Paris and history, one that nevertheless makes us understand that the sins of the past are not truly past."
A melancholy and mournful tale of the past's inextricable relationship to the present. Read full book review > 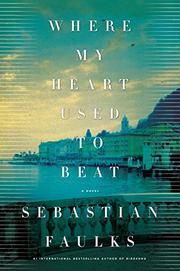 WHERE MY HEART USED TO BEAT
by Sebastian Faulks
FICTION & LITERATURE
Released: Jan. 26, 2016

WHERE MY HEART USED TO BEAT
by Sebastian Faulks
"An absorbing look at the intimate connection between love, war, and memory."
A novel that artfully mixes memory and desire as a World War II veteran accesses painful memories of a wartime romance. Read full book review > 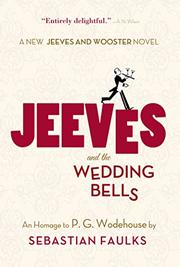 JEEVES AND THE WEDDING BELLS
by Sebastian Faulks
FICTION & LITERATURE
Released: Nov. 5, 2013
NAMED ONE OF THE BEST BOOKS OF 2013

JEEVES AND THE WEDDING BELLS
by Sebastian Faulks
"Faulks has risen to the challenge splendidly with this 'homage' to Wodehouse. Jeeves and Wooster live again!"
Bertie Wooster and Jeeves, the feckless young master and his erudite gentleman's gentleman, creations of the great English humorist P.G. Wodehouse, are back, courtesy of his inspired fellow countryman and novelist Faulks (A Possible Life, 2012, etc.). This is the first Jeeves and Wooster novel in some 40 years. Read full book review > 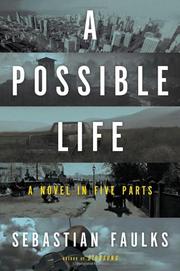 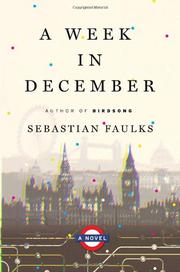 A WEEK IN DECEMBER
by Sebastian Faulks
"With its inexhaustible curiosity about the way the world works, this funny, exciting work is another milestone in a distinguished career. "
Two plots—one financial, the other terrorist—are being hatched, but there's much more going on in this absorbing big-canvas view of contemporary London from Faulks (Engleby, 2007, etc.). Read full book review > 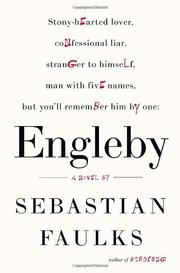 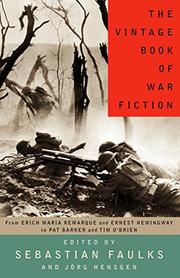 FICTION & LITERATURE
Released: Sept. 1, 2002
THE VINTAGE BOOK OF WAR FICTION
edited by Sebastian Faulks, Jörg Hensgen
FICTION & LITERATURE
Released: Sept. 1, 2002
THE VINTAGE BOOK OF WAR FICTION
edited by Sebastian Faulks, Jörg Hensgen
"That latter chunk of text alone makes War Fiction a more than worthwhile collection."
There's a lot of good writing in this interestingly conceived anthology, which includes three short stories and thirty-six excerpts from (mostly) novels about "the wars of this century." British novelist Faulks's otherwise generic introduction does make the challenging point that "serious fiction has moved further from plot and incident" in our time, thus making war fiction something of an endangered literary species. Therefore, the salvaging of passages from such comparatively obscure fictions as Stratis Myrivilis's grim Life in the Tomb (1924), Wolfgang Koeppen's A [sic] Death in Rome (1954) and A.D. Gristwood's The Somme (1927) provides a genuine service. Other excerpts, including an overfamiliar one from Hemingway's A Farewell to Arms and a pedestrian one from Larry Heinemann's overrated Paco's Story are arguably rather less justifiable. One wishes, furthermore, that the editors had found room for such estimable chroniclers of wartime experience as Waugh, Grass, and Solzhenitsyn. Conversely, the selections depicting WWII show an extraordinary range of artistic effects and subjects: there's the ordeal of combat (Norman Mailer, James Jones), along with the Atlantic sea war (Alistair MacLean), the science of codebreaking (Robert Harris), medical atrocities committed against POWs (Shusako Endo), the bombing of Hiroshima (Martin Booth), and the refugee experience (Louis Begley). Read full book review > 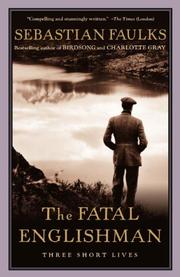 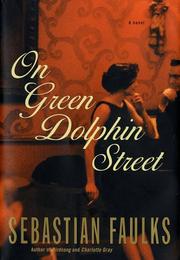 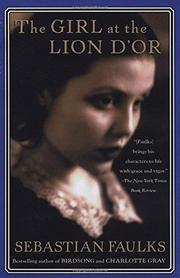 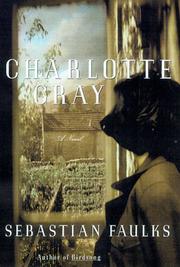 FICTION & LITERATURE
Released: Feb. 1, 1999
CHARLOTTE GRAY
by Sebastian Faulks
FICTION & LITERATURE
Released: Feb. 1, 1999
CHARLOTTE GRAY
by Sebastian Faulks
England's redoubtable Faulks (A Fool's Alphabet, 1993; Birdsong, 1996) offers up a third solid, alluring, durable novel'set in 1942—43, just as the tide begins to turn, however slightly, against the Nazis. Charlotte Gray—pretty, intelligent, well-educated—is in her middle 20s when she leaves her native Scotland for London, hoping that in the capital she can do something more significant for the war effort. She wouldn—t have expected, though, that a chance encounter with a worker in the secret diplomatic corps would lead to her being interviewed by —G Section— and sent (in careful disguise) to France to work within the very gradually unifying Resistance there. Even though (before she's parachuted into the village of Lavourette) Charlotte has fallen passionately in love with war-wearied RAF pilot Peter Gregory (who, not long after, —goes missing—), and even though her also-intense love of France is muddied by a badly impacted father-complex (her aloof parent, now a psychoanalyst, fought there in WWI), Charlotte is anything but the typically starry-eyed girl looking for love, adventure, and meaning. Faulks's perfect and never false descriptions of France under the Occupation—the hunger, the monochrome bleakness, the increasing danger'suit Charlotte's mature young character just as perfectly as do the people she meets (Julien Levade, the idealistic young architect and resistance worker; his aging failed-artist father; varieties of townspeople on both the political left and right) and as do the dangers she herself encounters: never melodramatic, always riveting. Nor have grief and horror been more wrenchingly and unremittingly portrayed than here when first Julien's father and then the two young Jewish boys whom Julien has been hiding are sent to the camps and their deaths. What happens to Charlotte in the end may be less satisfying than other elements of her story, but the resolution, even so, leaves nothing of seriousness behind. A war novel that should take its place among the masterpieces of the genre. Read full book review > 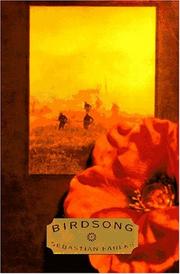 FICTION & LITERATURE
Released: Feb. 1, 1996
BIRDSONG
by Sebastian Faulks
FICTION & LITERATURE
Released: Feb. 1, 1996
BIRDSONG
by Sebastian Faulks
Faulks's fourth novel, an English bestseller, is his second (after A Fool's Alphabet, 1993) to appear in the US: a riveting story of love—and incalculable suffering—during WW I. What could become mere period romance is transformed, in this writer's hands, into dramatized history with a power almost Tolstoyan. Faulks renders love as compellingly as war—as in the opening chapters, when 20-year-old Britisher Stephen Wraysford, on business in Amiens, falls passionately in love with the childless and unhappily married Isabelle Azaire, nine years his senior, and steals her away. This is in 1910, and when Isabelle, secretly pregnant, suffers from overwhelming guilt, she abandons Stephen, returning to her unloving husband; six years later, Wraysford is near Amiens again, now as a Lieutenant (soon Captain) with the British Expeditionary Force, preparing for battle in what is to be the butchery of the Somme valley. Isabelle and Wraysford will meet briefly again—and both will be changed forever by the catastrophic war about to sweep over humanity, changing entire generations. Faulks's depictions of war in the trenches—and in the mazes of deadly tunnels beneath them—are extraordinary, graphic, powerful, and unsparing. Stephen will survive to war's end, and so will Isabelle, though not before both are changed beyond recognition, and doomed not to be rejoined again. The war, here, is Faulks's real subject, his stories of destroyed lives, however wrenching, only throwing its horror into greater relief and making it the more unbearable. An ending too neatly symbolic can be pardoned, while a denouement describing the birth of Wraysford's and Isabelle's great-grandson—in 1979, when their lost histories have been ferreted out by a granddaughter named Elizabeth, the new mother—is so perfectly conceived and delivered as to bring tears to the reader insufficiently steeled. Once more, Faulks shows his unparalleled strengths as a writer of plain human life and high, high compassion. A wonderful book, ringing with truth. Read full book review > 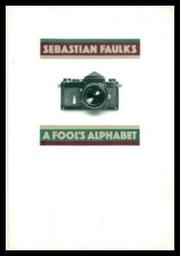 FICTION & LITERATURE
Released: April 6, 1993
A FOOL'S ALPHABET
by Sebastian Faulks
FICTION & LITERATURE
Released: April 6, 1993
A FOOL'S ALPHABET
by Sebastian Faulks
Britisher Faulks's first US publication: an observant, unpretentious, and moving story of a man's life to age 40. Recovering from wounds in Italy in 1944, Cpl. Raymond Russell meets—and falls in love with—a young girl named Francesca, who after the war becomes his wife and moves with him back to England. In 1950, the two have a son named Pietro, their only child, who 12 years later loses his beloved mother to cancer. From these beginnings, the novel unfolds, becoming the story of Pietro's life in 26 chapters, each named for its setting and arranged in alphabetical (but not chronological) order, starting, for example, with Anzio in 1944 (where Pietro's father was wounded and met Francesca), going on to Backley in 1950, where Pietro was born, from there to Colombo, Sri Lanka, in 1980, where Pietro is on a photographic assignment, then back to Dorking in England, where Pietro's mother dies in 1963, and so on. The alphabetic device is offered (partly) in homage to a provincial fellow soldier of Pietro's father's who was awed by travel and ``said he wanted to spend a night in a place beginning with every letter of the alphabet before he died.'' If there's risk of the scheme becoming artificial, Faulks keeps the danger well at bay: his observant eye and intelligent voice easily and entirely captivate the reader, who follows Pietro from school in Fulham (1964) on through first love (Lyndonville, Vermont, 1971); from the pathos of a nervous collapse in Quezaltenango, Guatemala, (1974) on to the meeting of his wife- to-be in Ghent (1981); and from there through another decade of a sensitive and sometimes emotionally precarious life in which, say, descriptions of office politics and of a father's death can be, in their different ways, equally compelling and poignant. Life as it is—plain, human, real—made into the finest kind of art. Read full book review >