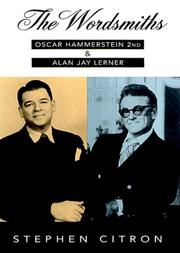 NON-FICTION
Released: July 1, 1995
THE WORDSMITHS: OSCAR HAMMERSTEIN 2ND AND ALAN JAY LERNER
by Stephen Citron
NON-FICTION
Released: July 1, 1995
THE WORDSMITHS: OSCAR HAMMERSTEIN 2ND AND ALAN JAY LERNER
by Stephen Citron
Twice-told tales of two legendary Broadway lyricists. Citron (Noel and Cole, 1993, etc.) works chronologically: The first quarter of his text is pure Oscar Hammerstein (18951960) and the last quarter all Alan Jay Lerner (19181986); in between, he intercuts the stories but makes little attempt to relate them to each other. Despite some similarities, the two men had radically different personalities. Hammerstein was a moralist, an old- fashioned lyricist and librettist whose early work was in the accepted operetta style of the day. He had two extremely lucky breaks in his long career: One was an invitation to collaborate with Jerome Kern in 1927 on Show Boat, universally acclaimed as the first ``modern'' musical; the second was a late-in-life partnership with Richard Rodgers, beginning with the smash Oklahoma! (1943), which transformed him into a living legend. Lerner was a much more uneven and unpredictable worker. He benefitted from one important professional relationship, with Frederick Loewe, a Viennese-born composer who perfectly balanced Lerner's fiery temperament with his steadier musical hand; the duo are best remembered for My Fair Lady (1956) and Camelot (1960). While Hammerstein was a warm family man, genuinely loved by his colleagues, who had a lifetime of theatrical hits, Lerner passed through a slew of stormy marriages, battled a long addiction to amphetamines, and experienced a relatively short period of success. Citron offers insightful readings of both men's lyrics, as well as some interesting remarks about the evolution of their best-loved works. But his narrative is marred by awkward constructions (``all was not as bad as it might appear in the preceding paragraphs'') and oddly inappropriate clichÇs (``rumors...ran through the theater community faster than money through a drunkard's pockets''). Several previous books have already covered much the same biographical ground. Best read for its analysis of the songs; otherwise, little flesh on these bones. (b&w photos, not seen) Read full book review > 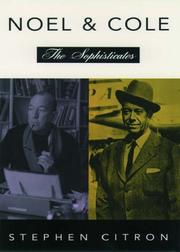 BIOGRAPHY & MEMOIR
Released: May 1, 1993
NOEL AND COLE: THE SOPHISTICATES
by Stephen Citron
BIOGRAPHY & MEMOIR
Released: May 1, 1993
NOEL AND COLE: THE SOPHISTICATES
by Stephen Citron
Witty, urbane, and enormously gifted, Noel Coward and Cole Porter were both born in small towns and encouraged by strong mothers. Both were gay, died in their 73rd year, and, in a field dominated by collaborators (Rogers and Hart, etc.), wrote the music as well as the lyrics to their own songs. Here, Citron (The Musical from the Inside Out, 1992, etc.—not reviewed), himself a professional songwriter, anchors the pair in a tradition that reflects their restless times and analyzes the qualities that made each man an original. In alternating chapters that cover the composers in turn, Citron—who offers incisive analyses of their hit songs— successfully traces the trajectories of the two musical stars. Born in 1891 to a wealthy but uncultured Indiana family, Porter was sent east for schooling. At Yale, he wrote undergraduate reviews, made important lifelong connections, and acquired his lavish way of life. Never dependent on songwriting for a livelihood (in addition to his own fortune, he married a wealthy divorcÇe), he was late in finding the limelight. By contrast, Coward, born in 1899 to an impecunious middle-class English family, bypassed a formal education and was on the stage by age 14. The more versatile of the two, he wrote fiction, plays, songs, operettas, and musical reviews, and acted and starred in many of his own productions— while Porter wrote only complex harmonies, lilting melodies, and inimitable lyrics, many of them risquÇ. Porter emerges here as the colder personality, always a bit remote and, in his final, pain- ridden years (a leg, injured in a horse-racing accident 21 years earlier, had to be amputated), a semi-recluse. The two musical lions admired each other, Citron says, and they shared many friends and theatrical associates. A thorough introduction—featuring much original song interpretation—that's a valuable addition to existing memoirs and biographies (e.g., Coward's own Future Indefinite, 1986, and Charles Schwartz's Cole Porter, 1977). (Thirty halftones) Read full book review >