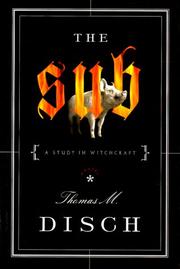 MYSTERY THRILLER
Released: July 6, 1999
THE SUB: A STUDY IN WITCHCRAFT
by Thomas M. Disch
MYSTERY THRILLER
Released: July 6, 1999
THE SUB: A STUDY IN WITCHCRAFT
by Thomas M. Disch
If Jesse Ventura thinks Garrison Keillor is the enemy, wait till he gets hold of this newest installment in Disch's luridly entertaining "Supernatural Minnesota" series (earlier offenses include The Businessman, 1984, The M.D., 1991, and The Priest, 1995) The story's certifiably insane actions occur in and around the rural metropolis of Leech Lake, an unassuming hamlet distinguished only by an old folks" home with a pronounced Native American presence, Navaho House, and nearby New Ravensburg Prison. But things get interesting when 'sub—(stitute teacher) Diana Turney begins recovering memories of sexual abuse by her late father Wes, and is mysteriously drawn to the smokehouse where Wes's body was found. Diana's sister Janet is doing time for shooting her unfaithful husband Carl, a guard at New Ravensburg, where inmate Jim Cottonwood, falsely convicted of rape, exercises his 'shaman frame of mind" to commune with shape-shifting comrades. If you think that's strange, how about Diana's assumption of witchly powers (Wes still exercises power over her), her nasty habit of turning complacent men into (what else?) pigs, and a revenge plot involving a woman similarly metamorphosed, her hellfire-and-brimstone father, and a virginal teenager obsessed with the newly empowered (hence irresistible) Diana? "It can be unnerving to be stared at by four large pigs," the omniscient narrator mildly remarks, as part of a godlike commentary that seasons an increasingly bizarre plot with amusing mini-essays on such topics as original sin, the gender wars, Native American folklore, and the morality of vegetarianism. Think Our Town or Winesburg, Ohio on overdoses of Mom's apple pie and Grandpa's elderberry wine, and you—ll have an idea of the stomach-churning hilarity of Disch's impertinent assault on "innocent" Middle America. Over the top, of course—but good, dirty fun anyway, from a stylish satirist who knows how to sling it with the best of them. Read full book review > 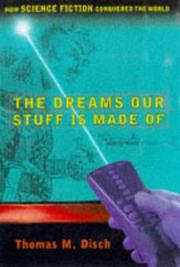 HISTORY
Released: May 1, 1998
THE DREAMS OUR STUFF IS MADE OF: HOW SCIENCE FICTION CONQUERED THE WORLD
by Thomas M. Disch
HISTORY
Released: May 1, 1998
THE DREAMS OUR STUFF IS MADE OF: HOW SCIENCE FICTION CONQUERED THE WORLD
by Thomas M. Disch
A gifted writer casts a critical eye on the genre that gave him birth. Disch, a novelist, poet, and critic, first became known for his science fiction, including such classic novels as Camp Concentration (1969). He turns in this new work to an examination of the literature he fell in love with as a boy, and then worked to alter and expand as an adult. His thesis is that science fiction has pervaded American life, politics, and culture to such a degree that we are no longer even aware of it. In a series of linked but essentially discrete chapters, he discusses such topics as: how science fiction of the '50s affected our attitudes toward the atomic bomb; science fiction as a religion (notably in the life of failed SF writer L. Ron Hubbard and his creation of Scientology); and the manner in which conservative SF writers such as Jerry Pournelle and William R. Fortschen directly altered our military policies, leading to President Reagan's "Star Wars" program. Predominantly liberal but hardly PC, Disch is most controversial in his chapter on "feminizing— science fiction, in which he makes the case that the feminist-driven works of SF icon Ursula Le Guin can be just as limited as those of macho right-winger Robert A. Heinlein (Disch uncharacteristically avoids comparing their literary abilities). As these topics suggest, Disch tends to focus on the negative impact of the genre, and many in the field may feel battered by this book. But he writes with such keen insight and compulsive readability that only the most blinkered SF fan will be able to reject his ideas outright. Disch's provocative, engrossing book may fan the flames of a number of simmering arguments in the SF community, but when the smoke clears we may all, as a result of this tonic work, see more clearly. Read full book review > 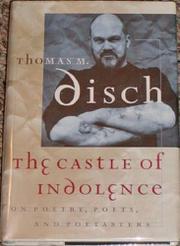 HISTORY
Released: Sept. 18, 1995
THE CASTLE OF INDOLENCE: ON POETRY, POETS, AND POETASTERS
by Thomas M. Disch
HISTORY
Released: Sept. 18, 1995
THE CASTLE OF INDOLENCE: ON POETRY, POETS, AND POETASTERS
by Thomas M. Disch
Due largely to his success as a novelist (The Priest, p. 89, etc.), Disch has followed his poetic Muse without becoming part of the poetry racket (as Disch describes it, grants and awards and all the other free lunches poets arrange for one another). The same independent spirit pervades this outstanding collection of essays and reviewssimply, the best work of practical poetry criticism to be published in decades. Disch brings together nearly 30 fugitive pieces from both the mainstream (TLS, Washington Post, LA Times) and marginal (Hudson Review, New Criterion, Boulevard) press. And while there are no earth-shattering pronunciamentos punctuating these essays, there is plenty of common sense for common readers. Disch speaks plainly and eloquently (in the title essay) of the ``indolence, incompetence, and smugness'' that dominate the poetry world today. No mere scold, Disch supports his views with plenty of careful readings, all of which reflect a truly catholic taste. He praises the ``sheer lyric loveliness'' of Kathleen Raine and celebrates such other neglected figures as Peter Whigham, Kenneth Fearing, and Christopher Fry, whose verse dramas have been lost in the era of stage naturalism. Among his contemporaries, Disch finds ``epochal significance'' in Frederick Turner's SF epic, The New World; wit and grace in Vikram Seth's Golden Gate; and ``dependably near-perfect accomplishment'' in the work of Anthony Hecht. Rather than indulge in ``teapot tempests'' about the state of the art, Disch names the names of so many fakers and shakers: the ``more-holistic-than-thou'' posturings of W.S. Merwin; the macho vulnerability of Raymond Carver. Disch gives us Ashbery as ``the poet laureate of Spaciness'' and reads James Tate as a long ``toke on a sixties bong.'' No secret agendas, no backslaps, no compromises here. Those who seldom read poetry anymore will figure out why after enjoying Disch's always entertaining volume. Read full book review > 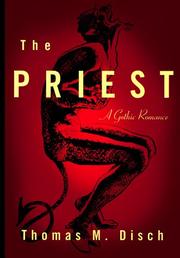 MYSTERY THRILLER
Released: March 24, 1995
THE PRIEST
by Thomas M. Disch
MYSTERY THRILLER
Released: March 24, 1995
THE PRIEST
by Thomas M. Disch
From the prolific Disch (The Businessman, 1984, etc.), another severely weird boogie through a strange and specific world, this time the hermetic enclaves of some homosexual Catholic priests. To his credit, Disch resists heaping scorn on the troubled Father Patrick Bryce, an inveterate pedophile who can't stay away from hustlers and altar boys, even if the pursuit of his unholy pleasures has repeatedly landed him in hot water. Blackmailed by his own bishop and by a New Age zealot (and former trick), Father Bryce finds himself forced to preside over the Church-sanctioned establishment of a bunkerlike commune—where young girls considering abortions will be sequestered before they can terminate their pregnancies—while he's forced to receive a massive Satanic tattoo on his chest. Wracked by nightmares about partaking in a medieval Inquisition of French heretics, the wicked priest is nevertheless unprepared to ``transmentate'' into the figure of Bishop Silvanus de Roquefort, who swaps identities with Bryce and proceeds to rape and slaughter with the necrophilic brio that characterized his former Inquisitorial position. Silvanus finds his smorgasbord of debaucheries at the anti-abortion bunker, where the pregnant adolescents are guarded by a militantly dogmatic brother-and-sister team. As Bryce disappears into a newfound enthusiasm for auto-da-fÇ, sharing his transmentation experience with similarly dislocated UFO guru/author A.D. Boscage, Silvanus joins in a race to prevent the anti-abortion shrine's captives from being rescued by, among others, a friendly queer cleric whose murdered friend, Bing Anker, was one of Bryce's molestees. Bryce doesn't last long in the Inquisition: Accused of heresy by a tortured Boscage, the priest is crucified, but not before a plot to counterfeit the Shroud of Turin—using his body in place of Jesus'- -is revealed to him by yet another transmentated contemporary. A rapturously over-the-top yarn that takes a refreshingly bitchy stance. Not something the Pope will be reading before bedtime. Read full book review >