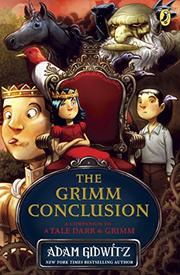 The names change, but the characters and themes not so much as Gidwitz takes a pair of children through a third series of folk-tale scenarios punctuated with washes of blood, fire, tears and parental issues that presage readers’ encounters with Bruno Bettelheim.

Before finally making good on their vow never to part, twins Jorinda and Joringel hie off on separate plotlines. Jorinda, as Ashputtle (freely translated as “Toilet Cleaner”), is betrothed to a comically clueless prince, survives three nights in an ogre’s haunted castle, becomes a child tyrant queen and is murdered. Joringel, magically reconstituted after having his head snipped off by his stepfather, swallows a fear-killing juniper berry, gives Sleeping Beauty CPR and rescues his sister from hell with help from the devil’s grandmother. So intrusive a narrator that even his characters hear him, Gidwitz offers commentary and (necessarily frequent) warnings about upcoming shocks. He then later steps in to shepherd his protagonists to modern Brooklyn for some metafictional foolery before closing with notes on his sources. After many tears, few of them happy ones, and much reference to suppressed feelings of anger and guilt, the children are reconciled with their neglectful, widowed mother and go on to a happy-ever-after in an anarchic day camp dubbed Jungreich, the Kingdom of Children.

THE CHUPACABRAS OF THE RÍO GRANDE
by Adam Gidwitz
Children

THE CREATURE OF THE PINES
by Adam Gidwitz
Children

SO YOU WANT TO BE A JEDI?
by Adam Gidwitz
Children

IN A GLASS GRIMMLY
by Adam Gidwitz

OF ENEMIES AND ENDINGS
by Shelby Bach
Newsletter sign-up