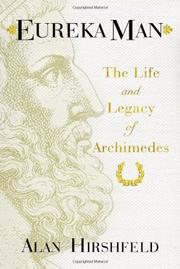 Thoroughly enjoyable look at the tumultuous life and resounding influence of a genius of antiquity.

A mathematician, engineer, military strategist and physicist, Archimedes (287–212 BCE) is famous for his discovery of the principle of buoyancy. More importantly, he is renowned for his war-time defense stratagems against the Romans, which were based on physics, geometry and more than a bit of cunning. His unparalleled output includes deducing the numerical value of pi; devising the means to compute many complex geometric formulas including the surface area and volume of a sphere; and establishing the proof of the law of the lever. Hirshfeld (Physics and Astronomy/Univ. of Massachusetts, Dartmouth; The Electric Life of Michael Faraday, 2006, etc.) writes that Archimedes “exemplifies the human species’ utmost reach as scientific thinker and mechanic, combining the footloose imagination of a da Vinci, the quantitative mastery of a Gauss, and the methodical inventiveness of an Edison.” The fact that much of his edifice was destroyed in antiquity has plagued historians for centuries, and the discovery of an ancient codex—now called the Archimedes Palimpsest—was a spectacular boon to modern understanding of Archimedes’s mathematical accomplishments. Hirshfeld devotes the second half of the book to the adventures of the palimpsest as it traversed the globe, detailing how original Archimedean treatises were bleached, cut and reused for a Byzantine-era Christian liturgical manual. It wasn’t until 1906 that a Danish professor recognized the ancient Greek writing that still existed in faded ink beneath the religious text, which proved that, incredibly, Archimedes “anticipated by some two thousand years Europe’s most fertile mathematical minds.”

Hirshfeld writes clearly and with enthusiasm, navigating even the occasional dense mathematical concept with easy-to-understand language and accompanying diagrams.

THE ELECTRIC LIFE OF MICHAEL FARADAY
by Alan Hirshfeld

THE MAN OF NUMBERS
by Keith Devlin
Nonfiction

HOW NOT TO BE WRONG
by Jordan Ellenberg
Newsletter sign-up