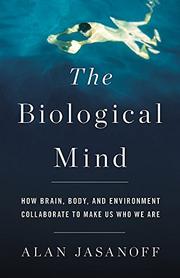 How Brain, Body, and Environment Collaborate to Make Us Who We Are
by Alan Jasanoff
BUY NOW FROM
AMAZON
BARNES & NOBLE
LOCAL BOOKSELLER
GET WEEKLY BOOK RECOMMENDATIONS:

What is the brain? If you answered by describing what the brain does, then this well-crafted overview may not be your cup of gray matter.

The devil may not make us do things, but peer pressure, illness, addiction, and the health of our wallets certainly do. Jasanoff, the director of the MIT Center for Neurobiological Engineering, begins his account by stating that his chief interest lies more in “what the brain is rather than what it does.” Though he allows some operational description along the way, he arrives at a suitably open-ended definition: the brain is “a transit point for myriad influences that work jointly on us and through us.” So, the brain is an organ that perceives and organizes perception, but there is a difference between brain and mind, a distinction between what is innate in the physical being and what comes in from the outside world. The definition is biologically grounded, and in that regard, one of the fascinating branches of the author’s discussion concerns the evidence for the notion that an organ or tissue transplant might “change a person’s mind or personality” beyond the obvious one of having a new lease on life. The text can get a touch dense, for matters such as “body-wide emotional responses” and “ventromedial prefrontal cortex damage” resist easy reduction to pop science. Still, Jasanoff writes with admirable clarity as he argues that the modern tendency of neuroscience to take a “brain-centered view” that overlooks external sources of behavior can lead to epistemological dead ends. For instance, if the mere fact of having a brain explains all the things we do, can we hold anyone accountable for crime—anyone, that is, other than the brain itself? The question opens onto a consideration of the brain of the mass shooter Charles Whitman, who suddenly seems a timely presence considering all the mischief brains get into these days.

For serious students of neurobiology as well as readers interested in philosophical questions of mind and body.

FROM BACTERIA TO BACH AND BACK
by Daniel C. Dennett
Nonfiction

THE UNPERSUADABLES
by Will Storr
Nonfiction