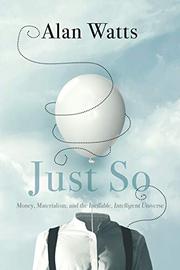 Playful and prophetic dispatches from the intersection of philosophy and spirituality.

Watts (Out of Your Mind: Tricksters, Interdependence, and the Cosmic Game of Hide-and-Seek, 2017, etc.), who died in 1973, loved to startle his readers by exposing their erroneous assumptions about themselves and the world. Nothing in his latest posthumous publication will shock Watts initiates more than his assertion that, “ideally, you only attend one seminar or read just one book and never have to come back to me again. It’s not the best business model, but as far as my livelihood is concerned, there are always more people out there foolish enough to pay attention to me.” With Just So, Watts is closing in on 50 books to his name, most of which cover Zen, Taoism, Vedanta, and Christianity mixed with British and American cultural criticism. That the author is witty and insightful on these themes is why readers return again and again to only slight variations on them. To adapt one of his best-known sayings, “the point of reading Watts is not to learn something from him; the point of reading Watts is to enjoy it.” So his son, Mark, has a solid platform to keep turning out these volumes assembled from archived lectures (the number of posthumous volumes has now surpassed those Watts himself saw through to publication). The challenge for such a project is to get the lecture segments to cohere into something that feels like a book—and hopefully one that offers something that lectures themselves, which are readily available online, do not. On this count, this latest mostly falls short, but the author’s charming style is enough to overcome the book’s structural shortcomings. He’s as good as he ever was on ecology, the self, and what does and does not make for a good life.