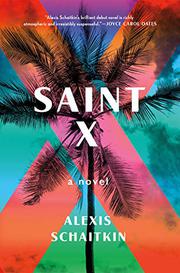 The death of a teenage vacationer on a fictional Caribbean island reverberates through many lives, particularly those of her 7-year-old sister and one of the workers at the resort.

“Look. A girl is walking down the sand.…As she walks, heads turn—young men, openly; older men, more subtly; older women, longingly.…This is Alison.” A dangerous froth of sexual tension escalates around Alison Thomas, visiting Saint X from the wealthy New York suburbs with her parents and little sister, Claire. Schaitkin evokes her fictional resort with sureness—“the long drive lined with perfectly vertical palm trees,” “the beach where lounge chairs are arranged in a parabola,” the scents of “frangipani and coconut sunscreen and the mild saline of equatorial ocean.” After the disaster, the focus shifts to Claire, who changes her name to Emily after her bereaved family moves to California but never escapes the shadow of the event. “I knew the exact day I outlived Alison. Eighteen years, three months, twelve days.” When she moves back East for a publishing job in New York City, she crosses paths with one of the resort employees her sister was partying with the night she died. These men were exonerated in the matter of Alison's death, but Clive Richardson was arrested for selling pot in the process; after prison, his life is so devastated that he immigrates to Manhattan. After Emily gets in Clive’s taxicab, her obsessive desire to know more about her sister’s death—which, by now, the reader fully shares—consumes her life. The complex point of view, shifting among an omniscient narrator, Emily's perspective in first person, Clive’s immigrant story in close third, plus brief testimonies from myriad minor characters, works brilliantly. Just as impressive are Schaitkin’s unflinching examinations of the roles of race, privilege, and human nature in the long-unfolding tragedy. Setting the story in a fictional place, collaged and verbally photoshopped from real Caribbean settings, is daring, but this writer is fearless, and her gamble pays off.

This killer debut is both a thriller with a vivid setting and an insightful study of race, class, and obsession.