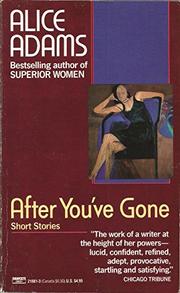 It's too bad that Adams titled this new collection (her fourth) after the weakest of the 14 stories here--a smug monograph narrated by a jilted lawyer and directed at her poet ex-lover--because it may discourage Adams fans from delving further to sift out a few scattered gems. In "Fog," for instance, as a small mishap redirects that start of a San Francisco dinner party and ends up changing the course of a few lives, it's pure Adams, toppling the exquisite social order to get to the dark--and often funny--truths below the surface. In "Ocracoke Island," elderly professor Duncan Elliott, on a visit to Manhattan, is a stirring, sharply etched character as he plods from meeting to meeting, worrying about his dental problems and spreading his tale of woe: recently, his fourth wile, Cath, has run off with another man to live on Ocracoke Island, a place that now looms large in Duncan's imagination. And "1940: FALL," like an earlier Adams story, "Roses Rhododendron," deftly captures a childhood memory about belonging, at least temporarily, to someone else's world. At her best, then, Adams knows just how to put love through the prism of social convention so that it shimmers back at us refracted into its separate parts--lust, pity, jealousy, need. But too often the kind of narrative shorthand she increasingly relies on (where physical descriptions fill in for emotions and memories are weightier than actions, and all the missing pieces are explained with parentheses) gets in her way. Stories like "A Sixties Romance" and "What to Wear" are so thin and mannered that they might be Adams parodies. Overall, worthwhile for those willing to sort the jewels from the strass--when she wants to, Adams can really sparkle.
Pub Date: Sept. 15th, 1989
ISBN: 0449218813
Page count: 224pp
Publisher: Knopf
Review Posted Online: March 14th, 2012
Kirkus Reviews Issue: Aug. 15th, 1989