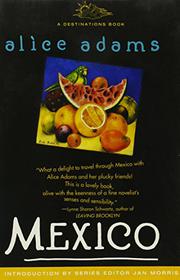 Some Travels And Some Travelers There (destinations)
by Alice Adams
BUY NOW FROM
AMAZON
BARNES & NOBLE
GET WEEKLY BOOK RECOMMENDATIONS:

Well-known novelist and short-story writer Adams (also this year's Best American Short Stories editor--see above) reflects on a lifetime of vacationing in Mexico. What is it about Mexico, Adams wonders early on, that so intrigues North Americans? For some, the phrase "south of the border" connotes "a cheery, cozy, somewhat infantile, villagey place"; for others--Malcolm Lowry for one--it "is mad, surreal, and dangerous." The question is an interesting one but, alas, Adams--a master of subtlety--never really addresses it directly. Instead she attempts to reveal the country's paradoxical nature through adroitly delineated scenes of her own daily, and often mundane, encounters there: having a drink at an upscale hotel, visiting an out-of-the-way beach, putting up with an annoying accordionist during dinner. Adams is not as interested in description or narrative as she is in character and innuendo, and the book is filled with one short stylish scene after another. In Zihuatanejo, Adams and "R." rendezvous annually with a rather mysterious older couple; in Campeche, she develops (apologetically) an antipathy for her maid ("her painted-on eyebrows, her small, hostile unintelligent eyes"). Sometimes this low-key, diarylike method works extremely well, and, as Jan Morris notes in her introduction, Adams's "apparently ingenuous jottings turn out to be more calculated than they seem." All too often, however, we are left hungering for more. Adams's hints and suggestions, which in a novel could reveal character, seem insufficient to tackle the inner workings of an entire nation. She also includes far too many details of the mechanics of travel--missed buses, bad meals, hassles with taxi drivers, etc. Adams approaches travel writing with the same mannerly, elliptical style that distinguishes her fiction. The results are mixed.
Pub Date: Dec. 1st, 1992
ISBN: 0671792776
Page count: 216pp
Publisher: Prentice Hall
Review Posted Online: March 15th, 2012
Kirkus Reviews Issue: Sept. 15th, 1991

A SOUTHERN EXPOSURE
by Alice Adams