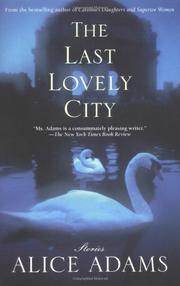 A collection of 13 stories offers Adams's (Medicine Men, 1997, etc.) usual blend of intimacy and the good life but also heavily plays the aging card, as story after story returns to the discontents of the middle years and beyond. The title piece is a case in point: aged Benito, a retired physician who used his killing in San Francisco real estate to fund clinics in his native Mexico, is still mourning the recent death of his wife--until shaken from his funk by an invitation to a party, extended by a much younger woman. Although the party is full of the dirty old rich, with some of whom Benito shares a less-than-savory past, he finds hope for the future in the possibility that his date seems to like him. That is, before she reveals that she's affianced to the son of their hostess. Women of a certain age fare little better: in "Old Love Affairs," for instance, a woman "almost old but lively," having gone through several husbands already, has one man kissing her feet while she tries to attract the attention of another. In "The Islands," a woman rebounding from the death of her Berkeley bookseller husband goes to Hawaii with a man interested in her, but does so only a few days after putting her (and her husband's) dear old cat Pink to sleep, so that the trip, tinged with sadness, is ill-fated-once her present company's true feelings about felines becomes known. The most sustained effort here, a series of four linked stories, looks at the tangled emotions of a psychiatrist, his alcoholic pianist wife, and his lover (another psychiatrist) as over time they pair, part, and realign, finding a kind of wisdom but no great joy in the ultimate configuration. With melancholy seeping into them, these plans for renewal fail more often than they succeed, in a pattern artful but distressingly familiar by the last page.
Pub Date: Feb. 1st, 1999
ISBN: 0671036181
Page count: 210pp
Publisher: Knopf
Review Posted Online: March 15th, 2012
Kirkus Reviews Issue: Jan. 1st, 1998