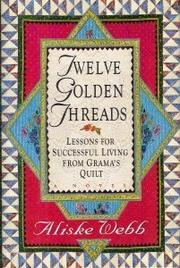  A How To Make an American Quilt wannabe that has already sold 25,000 copies in a self-published (1992) edition. Unlike bestselling Whitney Otto, however, motivational speaker and first- novelist Webb abandons any pretense of a story and allows her ``lessons'' to overtake--utterly--the barely breathing narrative. Bank employee Jennifer, a recent college graduate, and serious-minded high-school student Susan are sisters, but that's all we learn about them, since they're used only as vehicles to promote their mother's and their paternal grandmother's purported words of wisdom. On one of their monthly visits to Grama, the sisters decide to undertake a project: They will each, with Grama's expert guidance, design and make a quilt of their own in a year's time. Each month, the girls and their advice-spouting (``Cooperation is always a better way''), monologue-spewing psychologist mother drive to the seniors' complex in Clareville, where Grama has lived and quilted for 20 years. Over the 12 months before the old woman, predictably, passes on--leaving her two granddaughters with finished quilts and a lifetime of jargony catch phrases for success (``Persevere Through the Tough Times,'' etc.)- -Jennifer and Susan trace, cut, and sew with all the spark and personality of two automatons with failing batteries. As if to hammer home the point that women pass on women's wisdom to women, the men in these women's lives are kept conveniently out of the picture; brother Robbie's at college out west, and father Jack (along with his father) died years before. Most telling, perhaps, when Grama worries that she may sound like a ``Grand Old Guru,'' you find yourself nodding in consent. The literary equivalent of a dose of castor oil, this plodding self-helper reads more like a bad sermon than real fiction. (Literary Guild alternate selection; $200,000 ad/promo; author tour; TV satellite tour)