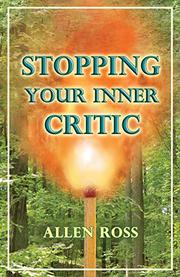 A debut guide explores ways to control and silence self-doubts.

“The Critic operates inside of you,” writes Ross in his book. “It is your enemy.” In a brief narrative characterized by this type of blunt language, the author describes the three central components of the kind of deeply internalized self-criticism that’s the subject of his manual. This self-criticism (“the Critic”) is first of all autonomous—it’s not a product of conscious choice. Second, this censure is also, paradoxically, external, created from negative input received as a child (“Even though the criticism comes from within, it is foreign in nature”). And third, this appraisal is completely negative and malicious. Ross breaks down every aspect of the Critic and its tactics, always in sharp, succinct language designed to be remembered. Readers are told, for instance, that the Critic’s attacks are always lies, since they rely on the presumption that the entire person, rather than some aspect, is deficient (“No one on the planet can be defective, or a loser or worthless…as a person”). The discussion ranges from the toll the Critic exacts on individuals to the cumulative waste and misery it causes the whole world in collateral damage, such as “marital and family strife, domestic violence, divorce, childhood abuse, rape, teen suicide, depression, crime, terrorism, persecution—and so much more.” By skillfully anatomizing both the tactics and the component parts of the inner conflicts that give rise to the Critic, Ross constructs a series of straightforward approaches to fixing the problem. “Since anger is always toxic,” he writes at one point, “the goal is to eliminate it 100%.” This kind of frank, no-nonsense advice will be invaluable to many readers accustomed to the fuzzy generalities of most self-help books. Although the author pays far too little attention to the well-known positive effects an inner critic can have (tact, for instance, would be impossible otherwise), his guide delivers a bolt of refreshingly direct advice on how to ease up on yourself.

A valuable and compact approach for removing the most corrosive tendencies of self-criticism.