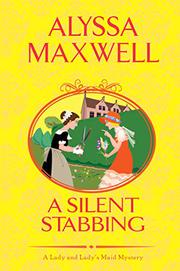 A titled lady and her clever maid solve yet another difficult case of murder.

It's 1920. Lady Phoebe Renshaw and her maid, Eva Huntford, have been instrumental in solving many a murder, including, most recently, that of Phoebe’s sister Julia’s husband (A Murderous Marriage, 2018). Lady Julia, pregnant and moping around her grandparents’ home, still blames herself for her husband’s death. Phoebe is surprised to learn that the family’s longtime head gardener has retired, leaving the job to Stephen Ripley, brother to Keenan, whose orchard produces pears for the cider known as perry. Stephen’s debut is marred when he’s seen bullying the garden boy, William. So when he’s found dead in the garden, not even his brother seems all that sad—especially since Stephen was evidently conspiring with a brash American who wanted to buy the orchard and build a hotel on the heavily mortgaged property. In the absence of William, who’s vanished, Keenan is arrested by the local chief inspector, who sees no need to look further. Luckily, Eva’s boyfriend, Constable Miles Brannock, is keeping an open mind. Eva worries about her sister Alice, who comes to visit without her children and seems out of sorts and perhaps a bit too interested in Keenan, her old boyfriend. Phoebe fears that William’s seen the killer and gone into hiding and ponders who’d want Stephen dead. Local pub owner Joe Murdock, whose business depends on perry, almost came to blows with the American, and sheep farmer Fred Corbyn stands to lose pasture and watering rights if the property is sold. The villagers, who loyally try to give Keenan an alibi, pitch in to harvest the pears and make the perry while he languishes in jail and Phoebe and Eva seek to unearth a killer.

A stylish post–World War I mystery with plenty of twists and strong female characters fully capable of negotiating them.

A PINCH OF POISON
by Alyssa Maxwell
Mystery