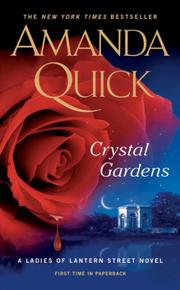 A psychic spinster meets her match in a dark, equally gifted stranger, in Quick’s Ladies of Lantern Street series launch.

Evangeline, of good breeding but approaching 30 and penniless, is deemed unmarriageable by Victorian society, but luckily she has not had to enter service or support herself as a governess. She is a paid companion, but for a most exclusive and remunerative agency, Flint & Marsh, which deploys clairvoyants as private eyes to the moneyed classes. Undercover in her dowdy disguise, Evangeline recently completed her latest assignment: exposing as a fortune hunter a young man, Douglas, who was courting an heiress. However, Evangeline wasn’t expecting Douglas to exact revenge. (The two were not unacquainted in the past.) When she’s forced to use psychic power to immobilize him, resulting in his death, Flint & Marsh sends her to a country cottage to recuperate (where she can devote some time to writing the melodramatic novels which are her real passion, at least until her landlord, Lucas Sebastian, comes along). When a London thug, Hobson, breaks into the cottage, knife at the ready, Evangeline manages to escape to Crystal Gardens, the mansion newly purchased by Lucas. As Lucas and his hired man Stone deflect the threat by luring Hobson into a menacing maze of carnivorous greenery, Evangeline cannot deny the powerful pull Lucas exercises on her, in both the paranormal and sensual realms. All too soon, however, an invasion of his relatives dampens the budding romance, as Lucas and Evangeline try to contain their ardor long enough to solve several mysteries—e.g., who murdered the former master of Crystal Gardens, Lucas’ Uncle Chester, a reputed madman whose botanical experiments have run amok in the gardens? Who hired Hobson to kill Evangeline? Is there really Roman treasure buried on the estate? These questions are overshadowed by the book’s main focus: ensuring that the course of true love is strewn with as many obstacles, psychic and otherwise, as possible.

Delivers all that Quick fans swoon over.

THE OTHER LADY VANISHES
by Amanda Quick
Fiction

THE GIRL WHO KNEW TOO MUCH
by Amanda Quick
Fiction

'TIL DEATH DO US PART
by Amanda Quick
Fiction

SEVEN FOR A SECRET
by Victoria Holt
Indie

Shadows from the Past
by Judith Erwin
Fiction

THE COMPANION
by Ann Granger
Mystery

A WOMAN OF CONSEQUENCE
by Anna Dean
Newsletter sign-up