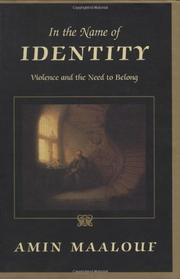 IN THE NAME OF IDENTITY

Violence and the Need to Belong
by Amin Maalouf
BUY NOW FROM
AMAZON
BARNES & NOBLE
GET WEEKLY BOOK RECOMMENDATIONS:

The latest attempt to explain the propensity of civilized nations to repeatedly engage in the massacre of their neighbors, a practice alternately known as genocide, race riots, ethnic cleansing, and, simply, mass murder.

Distinguished Lebanese novelist Maalouf (Ports of Call, 1999, etc.), long-time resident of France, focuses on the universal human need for a sense of identity. When it’s threatened or simply denigrated, individuals seethe with resentment. Yet this murderous need to belong is absurdly changeable, dependant on history, politics, geography, or economics. Thus, being black provides no sense of identity throughout much of Africa. In Nigeria, one is Ibo or Hausa, in Rwanda, Hutu or Tutsi, a difference that can be a matter of life and death. To those who move to the US this becomes unimportant: every black is black above all. The author looks not unkindly on America’s preoccupation with political correctness. No movie can cast a black as a criminal without other blacks in admirable roles, such as police chief. Maalouf regards this as a reasonable effort of a multicultural society to avoid marginalizing any group. Worldwide, the greatest threat to individual identity is globalization, promoted by developed countries (and threatening to the undeveloped), and led by the US (provoking resentment by everyone). Globalism is really a synonym for modernization: technology, relaxed morals, a breakdown in tradition. The author stresses that all this is an entirely western phenomenon, which means it’s a Christian phenomenon. With this in mind, the explosion of Islamic fundamentalism becomes less a mystifying religious ideology than an effort to preserve self-respect in the face of a menacing foreign ideology. As an Arab, a Christian, and an exile, Maalouf draws on long experience with the stress of holding onto an identity not shared by most of his neighbors.

A convincing thesis from a wise and civilized voice.

THE GARDENS OF LIGHT
by Amin Maalouf
Fiction

THE ROCK OF TANIOS
by Amin Maalouf

THE LIES THAT BIND
by Kwame Anthony Appiah
Nonfiction