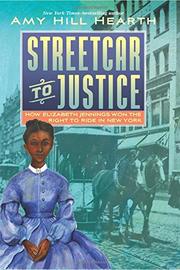 Elizabeth Jennings, a young, middle-class African-American woman in 1854 New York City, was on her way to church when she became the Rosa Parks of her time.

“Jim Crow” streetcars were nominally available but often ran late or not at all. All other streetcars were for whites only. Blacks could sit inside only if white passengers did not object. In Jennings’ case, it was the white conductor who made the decision. He and a police officer forced her off the streetcar, injuring her in the process. When she arrived home, her father encouraged her to write a detailed account while her memory was fresh. Mr. Jennings was active in many influential black organizations and had their support. Accounts of the incident were published in both mainstream and black-owned newspapers, and their attorney, a young Chester A. Arthur, filed a civil lawsuit. They won the suit, and the repercussions of the victory affected all transportation in New York. Hearth speaks directly to readers, explaining every detail of the events clearly, and includes copious sidebars with comprehensive historical and biographical information. The text is complemented by reproductions of contemporary illustrations and newspaper articles. Hearth steps out of the role of omniscient narrator, making the work a personal journey, allowing readers to follow as she describes her process from inspiration to researching and building the tale, one bit of evidence at a time.