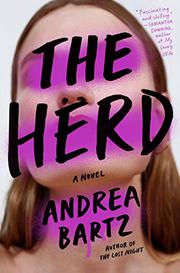 The enigmatic founder of an exclusive female-only co-working space suddenly disappears, stirring up a maelstrom of secrets in Bartz’s (The Lost Night, 2019, etc.) new thriller.

The Herd, emphasis on “her,” is the hottest, most sought-after co-working space in New York City—there’s even a waiting list. Founder Eleanor Walsh prides herself on her exclusive yet inclusive safe space for “women and marginalized genders” and seems genuinely dedicated to nurturing and inspiring creativity and joy. She’s hired her most trusted friends to keep the wheels turning, including publicist Hana Bradley, whom Eleanor has known since their Harvard days. Now Hana’s sister, Katie, a journalist, has come to New York after a failed book deal and a yearlong stint caring for their sick mother. Katie would love to score a spot at the Herd with Hana’s help, but Eleanor won’t hear of Katie jumping the waitlist, and meanwhile someone has been defacing the Herd offices with misogynistic (to say the least) graffiti. While Eleanor and Hana juggle that crisis, Katie sells her agent on a book about Eleanor, but everything blows up when Eleanor disappears. It turns out that Eleanor is hiding a closetful of skeletons which soon come tumbling out. But, of course, Eleanor isn’t the only one with secrets. Katie, who is white, and Hana, who is adopted and is described as having dark skin, have a fraught history, which is revealed via alternating narratives. This tension fractures them at a time when they need each other the most, adding a heavy dose of angst to the central mystery. Bartz whips up a fast pace and adequate suspense, though character development suffers a bit in the process. However, once the dominoes begin to fall in the twisty finale, readers will likely be turning pages too quickly to mind.

A soapy and fun woman-centric thriller.