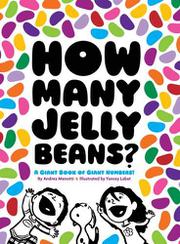 HOW MANY JELLY BEANS?

Emma's request for 10 is reasonable, as is Aiden’s for 20, but, auction-style, the numbers soon mount from 100 to 500, at which point Emma calls Aiden’s bluff. “That’s too many. You can’t eat five hundred jelly beans.” Well, he could eat 1,000 in a year, but that’s just two or three per day. How about 5,000 in a year? That would be a stack that’s as high as a 10-story building. As the two ponder this existential conundrum, the numbers keep going up, from 10,000 to 100,000 to 1,000,000. Labat’s black-and-white digital illustrations make the bright colors of the ever-increasing jellybeans stand out and pop off the pages. The speech bubbles, clean lines and efficiently drawn characters speak to his start in comics. The page depicting how Aiden would divvy 100,000 jellybeans among the different flavors works especially well, picturing single-color circles clearly labeled with the differing amounts (there's only one lemon jellybean). This helps readers learn to estimate, though Bruce Goldstone’s Great Estimations and Greater Estimations (2006, 2008) offer more specific examples.

An eminently child-friendly exploration of an ever-intriguing subject; pair it with David M. Schwartz and Steven Kellogg’s How Much Is a Million. (Math picture book. 4-8)

HOW MUCH IS A MILLION?
by David M. Schwartz
Children