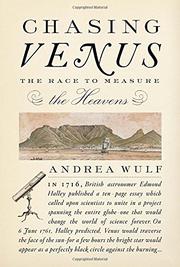 In the late 18th century, European astronomers scurried about the globe measuring the transit of Venus, hoping, at last, to learn the size of our universe.

Until this busy narrative, Wulf had turned her eyes more earthward with three previous outings about gardens (The Founding Gardeners: The Revolutionary Generation, Nature, and the Shaping of the American Nation, 2011, etc.). Here she glides easily into the heavens, where she clearly explains how Venus’ transit across the sun, which occurs every 105 years (and each time does so twice, at eight-year intervals—one will occur in June 2012), gave Enlightenment astronomers a chance to figure out such things as the distance between the earth and the sun. Their 1769 calculation—transit-derived—was quite close. The author follows the two international attempts, in 1761 and 1769, to accomplish the measurements from various global viewing points, describing in grim detail the vast difficulties of travel and communication, the geopolitical complications (wars didn’t help) and the various personalities of potentates and scientists that characterized the endeavor. The 1761 transit occurred before everyone were sufficiently ready, and the measurements were disappointing; 1769 was better—though poor Guillaume Le Gentil of France, who’d spent nine years devoted to the projects, saw only clouds at his observatory in Pondicherry, India. Worse, Jean-Baptiste Chappe d’Auteroche died of typhus only days after his successful recordings. The author notes the imprecision of the instruments, the difficulties of determining precisely when the dark spot of Venus began and ended its journey across the sun’s yellow wafer and the arduous treks Enlightenment men (yes, all men) undertook to Lapland, Tahiti, Hudson Bay and Baja. More than 100 pages of back matter reveal the sturdy research undergirding the lively narrative.

THE ADVENTURES OF ALEXANDER VON HUMBOLDT
by Andrea Wulf
Nonfiction

THE INVENTION OF NATURE
by Andrea Wulf
Nonfiction

THE BROTHER GARDENERS
by Andrea Wulf

THE DAY THE WORLD DISCOVERED THE SUN
by Mark Anderson
Nonfiction

THE MAP THAT CHANGED THE WORLD
by Simon Winchester
Nonfiction