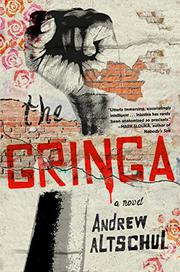 The making of a freedom fighter—or a terrorist, depending on one’s point of view.

Altschul (Lady Lazarus, 2008) takes his storyline pretty much straight from the headlines, offering a fictionalized treatment of the case of Lori Berenson, the American activist who served a 20-year prison term in Peru for her affiliation with a revolutionary group. Just so, Leonora Gelb is a young Jewish woman from New Jersey who, inspired by a professor, travels to Peru to enlist in a revolutionary group headed by philosophers, a group that she insists is not a terrorist organization even if people all around it have a habit of dying. Leo, as everyone calls her (save those who call her "la gringa" or Comrade Linda), is naïve and fervent; a critical point in the narrative comes when she rejects her visiting father’s offer to fly her home: “She won’t be who they want her to be, who they’d raised her to be: an investment, they’d no doubt call it, one that’s now in jeopardy.” Years after her incarceration, writer Andres, another young American, travels to Lima, despairing of his country after 9/11: “I was a castaway, lost in Amurka: a country I didn’t recognize, or didn’t want to recognize.” Tracking down Leo’s story without ever meeting her save at one crucial turn, he concludes that she’s much like him, someone who hates her country for the ill it does in the world. It takes Andres considerable time, as it does Leo, to discover that things are not always what they seem, that some people are to be trusted and others feared. When he does, Andres suffers the sad disillusionment of the one-time true believer, sure that his fate is to return home and take up a despised bourgeois life, his time in Peru “something I told at cocktail parties.” Altschul’s story is psychologically rich and closely observed, though it moves slowly, sometimes grindingly so, odd given the onrushing events he describes.

A sensitive portrayal of the search for meaning in an unforgiving world.