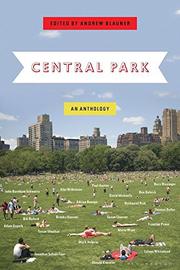 A leisurely stroll through the park with some agreeably literary companionship.

Though each of the pieces focuses on Central Park, editor and literary agent Blauner (editor: Brothers, 2009, etc.) observes of the millions who consider this their favorite spot in New York, “Ask what all of those people love most about Central Park, and you will almost never get two alike answers. Such is the vastness, the diversity, the wonder of this place that plays so many different roles to so many different kinds of people.” Much is made in the selections of the diversity of people drawn to the park, but the voices selected for inclusion make it read something like a special issue of the New Yorker (which has published many of these writers). More than a third of the pieces were previously published, including an excerpt from a novel by Paul Auster, a fable about “The Sixth Borough” by Jonathan Safran Foer, a letter from Wall Street Journal columnist Marie Winn to Holden Caulfield and the title essay from Colson Whitehead’s The Colossus of New York. As the writing ranges over decades as well as acres, many of the writers see the park as a microcosm of the city. Adam Gopnik notes, “There is always a new New York coming into being as the old one disappears.” Safran Foer: “It’s hard for anyone, even the most cynical of cynics, to spend more than a few minutes in Central Park without feeling that he or she is experiencing some tense in addition to the present.” There are repeated references to the zoo, to Jackie Onassis jogging, various sports and the occasional mugging, but there are also celebrations of the park as a cultural hub as well as a natural resource. One of the most incisive observations is secondhand, by Andy Warhol as conveyed by Susan Cheever: “It was better to live in the city than the country because in the city he could find a little bit of country, but in the country there was no little bit of city.”

A good anthology for an afternoon’s reading in the park.

IN THEIR LIVES
by Andrew Blauner
Nonfiction

OUR BOSTON
by Andrew Blauner
Nonfiction

TWICE UPON A TIME
by Hari Kunzru
Nonfiction

THE POWER BROKER
by Robert A. Caro
Nonfiction

CENTRAL PARK IN THE DARK
by Marie Winn
Newsletter sign-up