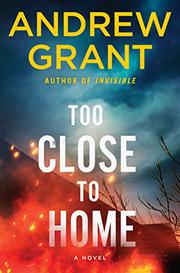 TOO CLOSE TO HOME

The second in the Paul McGrath suspense series (Invisible, 2019), in which the protagonist mops floors and pursues unofficial justice in a federal courthouse.

McGrath is a 20-year veteran of Army intelligence, and his current job as a nearly invisible janitor gives him free rein to go places in the building that are closed to the public. A New York politician abuses his office, and McGrath threatens to toss him off a roof unless he agrees to make amends to people he’s hurt. “My name’s not important,” McGrath says. “I’m just a janitor. Here to clean up the mess you made. One way. Or another.” But mainly, he is at the courthouse to figure out how to deliver justice to Alex Pardew, who cheated McGrath’s father and likely contributed to the old man’s early death. Key to resolving that issue is finding a missing file that could have turned Pardew’s mistrial into a conviction. Oh yes, and he needs to find Pardew himself, not an easy task. Along the way, he chats up Len Hendrie, who wants to represent himself in an arson case—Hendrie readily admits to burning a house down as revenge for losing his own home in a stockbroker’s short-selling scheme. Characters clearly explain the short-selling concept, so the reader won’t need a business degree to follow the chicanery involved. McGrath relies on “old habits—old instincts, always looking for something sinister,” which he fears may not be serving him well this time. But he’s smart, determined, decent, and not all that violent as fictional heroes go. And yet that Albany pol knows he’ll one day be a red splat on a sidewalk if he reneges on his vow to reform. Crisp pacing, complex plotting, and a sympathetic good guy all make for a most satisfying read.

Grant has several great series going, and the janitor-in-the-courthouse theme is fodder for another.