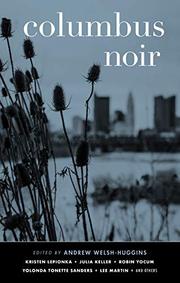 The latest stage in Akashic’s master plan to paint the world black is marked by 14 new stories whose most appealing features are their come-hither titles and the different shades of noir they invoke, from light gray to pitch black.

The hallmark here is competent but unspectacular professionalism that ticks all the boxes but originality. Sex fuels the plots of Robin Yocum’s “The Satin Fox,” in which a vice cop’s romance with a junkie stripper is threatened by blackmail; Kristen Lepionka’s “Gun People,” in which a wife takes up with one of the contractors upgrading the place her accountant husband has purchased; Craig McDonald’s “Curb Appeal,” which follows a woodworker’s romance with an interior decorator to its all-too-logical end; Mercedes King’s “An Agreeable Wife for a Suitable Husband,” whose ill-assorted title couple plot to rid themselves of each other; Julia Keller’s “All That Burns the Mind,” in which an Ohio State University English teacher finds a sadly predictable way of dealing with two problem students; and Khalid Moalim’s “Long Ears,” whose heroine learns a great deal about an ancient accident and a present-day murder but keeps mum. None of the entries excels editor Welsh-Huggins’ “Going Places,” in which a rising politician’s wife and fixer collude to shelter him from the consequences of his peccadilloes; the nearest competitors are Chris Bournea’s “My Name Is Not Susan” (a retired football player’s lover is suspected when he and his wife, the lover’s friend, are murdered), Tom Barlow’s “Honor Guard” (a chronically disappointing son negotiates frantically to keep his father out of prison after an argument with a stranger turns deadly), and Daniel Best’s “Take the Wheel” (a tawdry, fast-moving tale of a pair of frenemies whose partnership in a coffee shop is threatened by some lethally laced heroin). The newly arrived Chinese student in Nancy Zefris’ darkly comic “Foreign Study” manages to stumble through town without occasioning a single felony, and Laura Bickle’s “The Dead and the Quiet,” Lee Martin’s “The Luckiest Man Alive,” and Yolanda Tonette Sanders’ “The Valley” are notable for their closing intimations of grace, that rarest of qualities in noir.

As for Columbus, it comes across much like other Midwestern cities in noir stories, which may be the point.

FOURTH DOWN AND OUT
by Andrew Welsh-Huggins
Newsletter sign-up