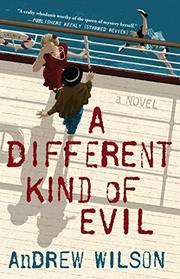 A DIFFERENT KIND OF EVIL

Free at last of the scandal of her notorious 1926 disappearance—though not quite yet of her adulterous spouse—Agatha Christie sails for the Canary Islands at the behest of the secret agent who helped rescue her from those complications (A Talent for Murder, 2017).

The first death, that of Secret Intelligence Service agent Douglas Greene, precedes Christie’s passage. In fact, it’s what makes John Davison press her to go to Tenerife in the first place. Nor does the second wait for her arrival. As Christie looks on in horror, Gina Trevelyan, a wronged wife who’s stowed away aboard the Gelria, launches herself over the side of the ship in a frenzy of grief, her body lost forever. Sculptor Helen Hart, the other woman whose affair with Guy Trevelyan has brought her to the ship as well, baffles Christie by taking moral responsibility for Gina’s death shortly after announcing, “I’m pleased the bitch is dead.” The Canaries themselves, home to sinister occultist Gerard Grenville, are equally dangerous for two of Christie’s fellow passengers from the Gelria and indeed for the celebrated novelist herself, who ends up hiding in a closet from which she watches as another passenger’s pearls are stolen by someone she can readily identify but declines to do so, even when Inspector Artemi Narciso Núñez arrests Christie herself for the theft and throws her in jail. The only way she’ll be able to help in solving Douglas Greene’s murder, it seems, will be if Wilson abates his fondness for local color long enough to allow His Majesty’s most unlikely secret agent to decide that it’s high time to link all the felonies that clutter this tangled tale.

The problem with casting a famous real-life mystery writer as your detective is that you can’t help inviting comparisons between your work and hers. It’s no shame to say that Wilson can’t stand up to such a comparison, but it’s no recommendation either.

DEATH IN A DESERT LAND
by Andrew Wilson
Fiction

A TALENT FOR MURDER
by Andrew Wilson
Nonfiction

SHADOW OF THE <i>TITANIC</i>
by Andrew Wilson
Nonfiction