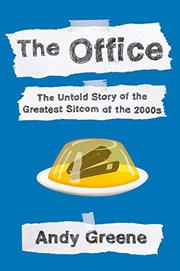 The Untold Story of the Greatest Sitcom of the 2000s: An Oral History
by Andy Greene
BUY NOW FROM
AMAZON
BARNES & NOBLE
LOCAL BOOKSELLER
GET WEEKLY BOOK RECOMMENDATIONS:

An oral history of the long-running, mega-popular American sitcom.

In this behind-the-scenes trove for the countless fans of The Office, Rolling Stone senior writer Greene pulls together comments, context, and insights in a round-table style that tracks the sitcom’s origins and success. Inspired by its British TV namesake, created by Ricky Gervais and Stephen Merchant, the American version of The Office, created by Greg Daniels, initially “faced a lot of resistance” as it struggled to find a place as a “single-camera, laugh-track-free show about a struggling small town paper company.” The narrative, ably curated by Greene, features the creators, actors, writers, and reviewers that spanned the show's nine-season run on NBC from 2005 to 2013. With cogent chapters about key episodes, lead characters such as the boss, Michael Scott (Steve Carrell), and assistant to the regional manager, Dwight Schrute (Rainn Wilson), craft talk, and nuts-and-bolts details, Greene smartly lets the contributors elaborate how a workplace mockumentary became a cultural phenomenon. Lively anecdotes reveal the closeness of cast and crew, and we see the writers’ room as a highly collaborative, intense training ground that fostered talents such as Mindy Kaling and BJ Novak. Director J.J. Abrams characterizes the show as having “a kind of timelessness to it,” a point driven home in reflections on what The Office did that differed from prime-time shows of its era: establishing a strong point of view, resisting glamorous actors, and building a set away from the traditional studio. Greene doesn’t just rave, however; the book includes respectful candor about episode ideas that didn’t pan out and late additions to the cast who didn’t fit. When Carrell left after Season 7, The Office rallied for another two seasons, to mixed response. Amid rich trivia for pop-culture buffs, relationships—both fictional and real—stand out. Everyone involved notes Carrell's genuine personality and professionalism; the text also serves as a tribute to his role in defining the series.