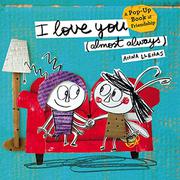 I LOVE YOU (ALMOST ALWAYS)

Insect friends find ways of coping with each other’s differences.

As with Llenas’ The Color Monster (2018), the magnificent art will prove a stronger draw than the sketchy storyline. Ralph is a “roly-poly” with a hard shell, a gift for camouflage, and a preference for being in charge. Rita is a firefly—quick, flashy, and extroverted. At first such differences don’t matter, but in time they prove irritating enough to lead to a brief falling-out. With the willingness to make a few accommodations, though, the two find their relationship strong enough to survive and flower into, at the end, a closing smooch. Gatefolds, inset booklets, immense multilayered pop-ups that seem to burst up as they open, and pull tabs that create big, broad movements enhance illustrations created from layers and assemblages of large and small cut-paper bits, all further energized with transparent colors and added scribbly lines. Though Ralph and Rita have buglike attributes, they look like humans (both white) in costumes. Younger audiences will likely pay more attention to the tabs and pop-ups than the theme, but both pals are drawn with large, expressive faces that make it easy to track the ins and outs of their close, if occasionally stressed, relationship.