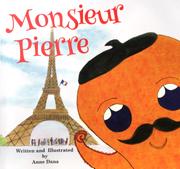 In this debut illustrated children’s book for ages 3 to 5, a French octopus gets lonely and leaves his native fountain to explore Paris and beyond.

Monsieur Pierre Poulpe, a beret-wearing orange octopus with a dapper mustache, has been living in a Paris fountain, along with two fish, the Mademoiselles Poussins, ever since he was a baby. The fish sisters are snooty, though, and talk only to each other, so one day lonesome Pierre decides to follow a diverse group of tourists around Paris. Through coffee and croissants, a boat tour, the Eiffel Tower, the Louvre, Notre Dame, and Montmarte, Pierre looks around and tries to be friendly, but everyone ignores him. The Notre Dame gargoyles frighten him, and Pierre embarrasses himself with a faux pas. Even the Poussin sisters, who tag along, give him the cold shoulder. Feeling down, Pierre returns to his home fountain, but then two American children come by arguing about what to bring home for souvenirs. “Take me!” shouts Pierre, and they do, kindly holding “some of Pierre’s arms” (great phrase) on the plane so he won’t be scared. Pierre enjoys such California staples as a swimming pool, breakfast smoothie, yoga class, and Bay Area tourist spots, liking it all so much that he settles down in California—though he sometimes has “surprise visitors from Paris,” like a museum guard toting the Mona Lisa and the now-friendly Poussins. In her book, Dana delivers a delightful, colorfully illustrated tale. The human figures are drawn somewhat clumsily, but they’re expressive, and Pierre is full of Gallic charm. As children follow Pierre on his adventures, they can learn something about Paris and its sights; they can also enjoy looking for and finding the Mademoiselles Poussins on all the France-set pages. They can learn a little, too, about the San Francisco area. Children will likely sympathize with Pierre’s loneliness, embarrassment, and fears, which make his new happiness and friendships in California all the sweeter; even the scary gargoyles come to visit along with the formerly snobbish Poussins.

This story provides a charming, warm introduction to Paris for kids, ending on a happy note.

A WALK IN PARIS
by Salvatore Rubbino
Newsletter sign-up