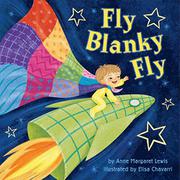 A bubbly boy, his adventurous imagination and one brightly hued blanky make for an exuberant bedtime tale.

In his yellow footie sleeper, Sam gallivants across sea and sky, transported by his quilted blanky. It’s a rocket and a kangaroo, then whale and train, changing at Sam’s command. With an opening stanza that is reminiscent of “’Twas the Night Before Christmas” in its anticipatory excitement, the text continues with rhyming stanzas that propel it forward, each beginning with a simile and ending with a directive (“ZOOM BLANKY ZOOM!”). Chavarri further emphasizes the blanky’s role in these fantasies, using the quilt’s patterns on each object it becomes. Young readers will be able to identify the colorful fabric on such things as the wings of a butterfly, the shell of a turtle and the sails of boat. While the blanket transforms radically, Sam is extremely consistent, from the way he’s drawn to his expression. The child’s cheerful face stands out, as it’s done in a digital, Flash-animated style. This contrasts with the blandness of his figure, giving him a disembodied effect. Despite this, the artist's illustrations, done in a brilliant, primary palette, are pleasing. Endpages show the blanky characters at their most appealing; as pencil drawings they recall classic Little Golden Books illustrations.

WHERE DO JET PLANES SLEEP AT NIGHT?
by Brianna Caplan Sayres
Children