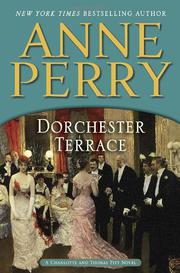 A dying adventuress holds entirely too many secrets for the miscreants who threaten Queen Victoria’s government, whose peace Thomas Pitt is sworn to keep.

Lady Vespasia Cumming-Gould, the wise and knowing aunt of Pitt’s wife Charlotte, is right to be concerned about her old friend Serafina Montserrat. It’s not just that Serafina’s life is drawing to a close; her illness makes her mind wander, and oftentimes she says things she shouldn’t—and, according to her niece, Nerissa Freemarsh, things that just aren’t true. But Serafina speaks very much to the point when she tells Vespasia that she’s afraid “they’ll kill me” because “I know too much.” Sure enough, the next time Vespasia comes to visit, Serafina has already died. Pitt, who’s already been put on high alert by the hints about very contemporary terrorist threats Serafina has intimated to Vespasia, ascertains that the cause of death was an overdose of laudanum quite impossible for Serafina to have administered to herself. Whodunit? And even more important, why? It doesn’t take long for Pitt (Long Spoon Lane, 2005, etc.) to focus his concern on Duke Alois Habsburg, a decidedly minor noble whose upcoming visit to his cousins in England seems increasingly likely to end with his assassination. But which of the slippery bureaucrats Pitt must deal with in his new capacity as head of Special Branch is the traitor behind the plot? And how can Pitt, who continues to be superstitiously reverent toward his alleged social superiors, smoke out the traitor and deal with him?

Slow to catch fire, but full of pleasing twists once it does—one of Perry’s most successful attempts to cloak contemporary geopolitical anxieties in plummy faux-Victorian periods.

A CHRISTMAS RETURN
by Anne Perry

SILENT IN THE GRAVE
by Deanna Raybourn
Newsletter sign-up