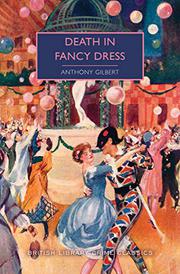 Did your New Year’s Eve leave you feeling underwhelmed? Tuck into this reprint from 1933 whose centerpiece is a country-house party complete with everything from costumes to a corpse.

The pseudonymous Gilbert—real name Lucy Beatrice Malleson (1899-1973)—spins a web whose center, according to Edward Philpotts of the Home Office, is the Spider, a well-placed blackmailer he suspects is behind a recent rash of upper-class suicides. So he's eager to have solicitor Tony Keith root around in his relatives' home, Feltham Abbey, where Philpotts thinks Tony’s cousin Hilary Feltham is the latest blackmailing victim. That suits Tony, who’s received a frantic summons to Feltham by Lady Eleanor Nunn, the widow of Hilary’s father, Sir Percy Feltham, who topped himself over a family financial scandal back in 1917, leaving her to rescue her own fortunes by marrying Sir James Nunn. And it suits Tony’s old school friend Jeremy Freyne, who’s just learned that Hilary, the woman he loves, has become engaged to Arthur Dennis, of the Foreign Office. While Tony looks for signs of the Spider, Jeremy will tag along, elbow this interloper Dennis aside, and sweep Hilary off her feet once more. Other interested parties turn out to have plans of their own. Sir James and Lady Eleanor want to throw a party for Hilary’s 21st birthday, when she’s due to come into the 10,000 pounds her father salvaged from the general wreck of his estate. Sir Ralph Feltham, Hilary’s cousin, seems intent on blackmailing everyone he meets. Arthur Dennis rather winningly suggests killing Ralph. And when Ralph fails to turn up at Hilary’s party, it’s for the best reason in the world. The result is a country-house whodunit on steroids, with hyperextended expository paragraphs, gossip on tap 24/7, endless blather, and a meticulously detailed explanation at the end. As a bonus, readers can enjoy a pair of short stories from 1939 that show how much sharper the author’s voice became in the interval.