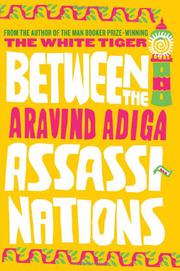 Adiga follows up his Man Booker Prize–winning debut (The White Tiger, 2008) with a collection of interconnected stories about the village of Kittur in southwestern India.

The title refers to the period between the assassinations of Indira Gandhi in 1984 and Rajiv Gandhi in 1991, though there isn’t much evidence of chronological progression here. The outside world seldom intrudes on Kittur, yet the tensions of caste and the conflicts of religion course through the narrative, sparking comedy and tragedy—sometimes both at once. The text is structured as a week’s walking tour of the village; italicized sections describing buildings and landmarks precede the stories of various characters. Among the protagonists are an ambitious delivery carrier, a workman who oversteps his bounds and a lower-caste schoolboy who sets off an explosion in chemistry class to avenge the mockery he has endured. One of the strongest pieces features a renowned journalist who has become disenchanted with his profession. “Even the writer of the truth should not know the truth entire,” he thinks. “Every true word, upon being written, is like the full moon, and daily it wanes, and then passes entirely into obscurity. That is the way of all things.” The often-poetic tone recalls fairy tales and folk parables, as poor people in particular come to terms with the way of all things, foremost among them that “the rich own the whole world.” Toward the end, Adiga introduces a character who could be confused with his creator, a writer praised as a young man because he has “gone into the countryside, and seen life there, unlike 90 percent of our writers.” Returning 25 years later, he falls in love with a much younger woman and realizes how much of an outsider he is: “he had become the stock figure whom he had worked into several of his stories—the lecherous old Brahmin, preying on an innocent girl of a lower caste.”

These provocative tales suggest that fiction illuminates truths beyond the reach of journalism.

THE WHITE TIGER
by Aravind Adiga