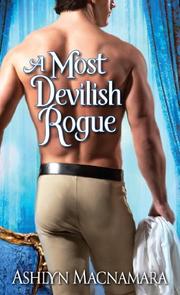 A MOST DEVILISH ROGUE

George, a wounded rogue, rescues the son of Isabelle, a ruined gentlewoman, from drowning and then must rescue him again from abductors. As the two work together to find her son, their lives and emotions become entwined.

George Upperton’s life is a mess. He’s gambled away a fortune; he can’t escape a family determined to get him settled; and he's taken up with a mistress whom he doesn’t like, who has extravagant tastes and is, apparently, pregnant. Escaping a house party for some fresh air and a seaside stroll, George witnesses a young boy get swept into the water and rushes in to save him. Rather than gratitude, his mother expresses cold disdain and rushes away with her child. But the two cross paths again when Isabelle’s son disappears. Seeking clues and comparing notes on possible suspects, George and Isabelle work to find Jack and bring him home, at the same time finding they share some surprising and disturbing connections, not to mention a blazing attraction. Passion flares and secrets are shared, but George and Isabelle can’t overcome their own fears and insecurities to admit their deepening feelings. In her second historical romance, Macnamara uses smooth writing to create well-rendered characters and a complex storyline. However, some plot elements are a little too contrived to seem realistic, and Isabelle is hard to warm up to, so the reader might be unconvinced by George’s quick romantic feelings for her. Still, the sensuality is high, and the plot holds together.

An imperfect yet satisfying romance.

ONCE UPON A TOWER
by Eloisa James
Fiction

HOW TO TAME YOUR DUKE
by Juliana Gray
Fiction