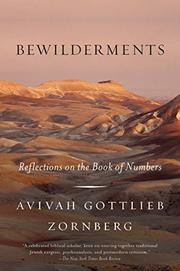 An exploration of the book of Numbers, the penultimate of the Hebrew Bible, a strange and edifying story of the passing of an entire generation while the Israelites wandered toward the Promised Land.

The book of Numbers opens and ends with a census of the emigrants from Egypt, hence the title. In Hebrew, it is known as “In the Wilderness,” descriptive of the 40 years’ sojourn in the desert. It focuses on the start and finish of the journey that forged a nation. Continuing her series on the books of the Bible, National Jewish Book Award winner Zornberg (The Murmuring Deep: Reflections on the Biblical Unconscious, 2011, etc.) presents a provocative exegesis of the salient points of the Numbers narrative. She considers ancient legal matters (the laws of adultery and the rights of women to claim legacies), the skeptical complaints of the wanderers (on the pretext of a meat shortage), and the rebellion of Korach, a kinsman of Moses. The author carefully deliberates on the meaning of Moses striking the rock to bring forth water. He also examines the odd parable of Balaam, a gifted speaker and diviner. This is not a simple retelling of Numbers but rather a Talmudic commentary of a high order based on artful Hebrew prose and poetry—and it is challenging. In order to draw out hidden messages, Zornberg employs lexicographical points, homonyms and double meanings. She displays her own superior hermeneutic skills as she calls on the teachings of vaunted rabbinic authority, Midrashic tradition and the homilies of Hasidic masters. The author frequently cites Rashi and the Ramban, as well as more modern thinkers, including Rilke, Proust, T.S. Eliot, Sigmund Freud and Walter Benjamin. Throughout, Zornberg incorporates psychiatry, philosophy and world literature into the study of Holy Writ.

A powerful, important textual deconstruction of the mystical fourth book of the Old Testament.

THE PARTICULARS OF RAPTURE
by Avivah Gottlieb Zornberg
Nonfiction

WISE MEN AND THEIR TALES
by Elie Wiesel
Nonfiction

THE PARTICULARS OF RAPTURE
by Avivah Gottlieb Zornberg
Nonfiction