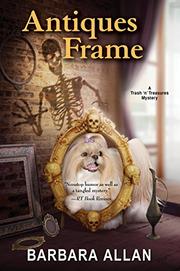 A mother-daughter sleuthing team has to solve an uncomfortably personal murder.

Despite its name, the Mississippi River town of Serenity, Iowa, where Vivian Borne and her daughter, Brandy, run an antiques shop and host the reality TV show Antiques Sleuths, has been plagued by an unusual number of crimes. But all has been going well lately—even Brandy’s Shih Tzu, Sushi, is no longer blind—until Camilla, the estranged wife of Brandy’s beau, Police Chief Anthony Cassato, moves to town. Suddenly Camilla, who’s opened her own antiques store, starts outbidding the pair at auctions and making a general nuisance of herself, especially to Tony, who mistakenly thought she’d signed divorce papers. Brandy runs into Camilla at another antiques store and auction house and sees her change prices on a picture frame but decides to say nothing, especially after Camilla apologizes to her for being vindictive. Too late: when Camilla is found bludgeoned to death with a corn husker she’d grossly overpaid for, Brandy, whose prints are found on the murder weapon, is thrown into jail. Her conflict with the victim—even the moment when Brandy shoves Camilla—has all been caught on tape for Antiques Sleuths. Now Vivian, an actress and diva who relies on happy pills to keep her most outrageous impulses in check, has the job of clearing Brandy. Since Tony must return to New Jersey to see his daughter, Vivian tracks down clues, tapping into every source she has in the town, a hotbed of gossip at the best of times. She learns that the picture frame Camilla bought has gone missing and wonders if it might turn out to be the reason for murder.

The amusingly ditzy duo, endlessly involved in dubious detection (Antiques Fate, 2016, etc.), manages to solve yet another case despite their generally clueless air.

THE END OF THE WEB
by George Sims
Mystery

I KNOW WHAT YOU BID LAST SUMMER
by Sherry Harris
Mystery

THE DEATH OF PIE
by Tamar Myers
Newsletter sign-up