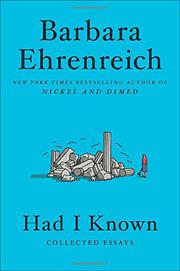 A compilation of the polemics and journalism of Ehrenreich, showcasing her stylistic evolution and social prescience.

The author is well known for her barbed magazine pieces and bestselling books (most notably, Nickel and Dimed), but she earned her chops as a freelancer. In the introduction, she reflects on this, noting how the literary economy that allowed her to establish her career has become atomized and unstable: “Though I didn’t see it at first, the world of journalism as I had known it was beginning to crumble around me….I saw my own fees at one major news outlet drop to one-third of their value between 2004 and 2009.” In a sense, Ehrenreich’s work has always been mournful, mostly for the traditions of social justice and collective organizing so ruthlessly attacked since the Ronald Reagan administration. The author stayed prolific even after her hardcover success, and this collection is sprawling, packed into sections such as “Haves and Have-Nots,” “Bourgeois Blunders,” and “God, Science, and Joy.” The chapter titles are often provocative (“Going to Extremes: CEOs vs. Slaves,” “S&M as Public Policy,” “The Unbearable Being of Whiteness”), and her significant research is conveyed in a wry, taut polemical style. Prominent topics include the brutalization of poor people (“if poverty tends to criminalize people, it is also true that criminalization inexorably impoverishes them”), the absurdities of the mental health system, and pervasive misunderstandings about gender and power (on Abu Ghraib: “I never believed that women were innately gentler and less aggressive than men”). While some earlier work may seem dated—e.g., essays on the grating 1980s yuppie ethos—others chillingly foresaw the devastation of labor and the middle class, the privatization of social services, and the increased cruelty of law enforcement toward the vulnerable. Memorably, Ehrenreich reflects on her own working-class roots as the “source of much of my radicalism, feminism, and, by the standards of the eighties, all-around bad attitude.”

LIVING WITH A WILD GOD
by Barbara Ehrenreich
Nonfiction

THIS LAND IS THEIR LAND
by Barbara Ehrenreich
Nonfiction

DANCING IN THE STREETS
by Barbara Ehrenreich
Nonfiction

BAIT AND SWITCH
by Barbara Ehrenreich

THE UNWINDING
by George Packer
Nonfiction

WHICH SIDE ARE YOU ON?
by Thomas Geoghegan
Nonfiction

LIFE ON THE OUTSIDE
by Jennifer Gonnerman
Nonfiction