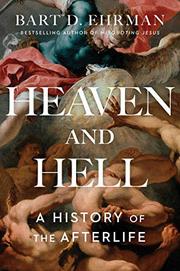 A study of the development of Christian concepts of the afterlife.

Ehrman (Religious Studies/Univ. of North Carolina; The Triumph of Christianity: How a Forbidden Religion Swept the World, 2018, etc.) skims the surface in this offering for general readers. Having built an academic career on examining the veracity of the Bible, the author uses his platform to argue that ideas of heaven and hell lack meaningful merit in the Scriptures. Ehrman begins with an overview of how the afterlife was treated in other ancient Western literature, such as the works of Homer and Plato, before moving on to the Hebrew Bible. Ehrman seems convinced that many readers will be surprised to learn that heaven and hell appear differently, if at all, in the course of Old Testament literature. He demonstrates that, at best, the ancient Hebrews believed in a vague afterlife. More likely, they believed that existence for individuals ended with death. By the time of Jesus, a natural desire for justice from the travails of life had led to a more developed concept of afterlife for the good while the bad met only with extermination. Turning to the teachings of Jesus, Ehrman is clear that “Jesus did not teach that when a person died they would go to heaven or hell.” Furthermore, he argues, “one of my theses is that a close reading of Jesus’s words shows that in fact he had no idea of torment for sinners after death.” The author brushes off scriptural references that seem to contradict these conclusions as unreflective of the words of “the historical Jesus.” Likewise, he discounts any ideas about hell attributed to Paul as later additions by other authors, an approach that echoes Erhman’s arguments in such previous works as Forged. The author concludes that although death is the ultimate mystery, he doubts it brings anything but oblivion, and he urges his readers to find comfort in their coming, dreamless sleep.

THE TRIUMPH OF CHRISTIANITY
by Bart D. Ehrman
Nonfiction

JESUS BEFORE THE GOSPELS
by Bart D. Ehrman
Nonfiction

THE ART OF DEATH
by Edwidge Danticat
Nonfiction