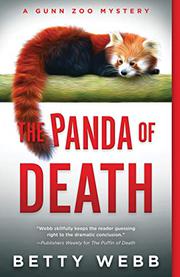 THE PANDA OF DEATH

A DNA test has disquieting and dangerous consequences.

With the popularity of DNA testing, many a family has found itself with members they never knew existed. So it’s a shock but not a total surprise for California zookeeper Theodora "Teddy" Bentley-Rejas (The Otter of Death, 2018, etc.), already the stepmother of two, to discover that her husband, Joe, has another son. Her mother-in-law, mystery writer Colleen Rejas, has been hiding Dylan Ellis, Teddy’s newfound stepson, in her cottage while waiting to disclose the relationship that was revealed when they both took a DNA test. After Teddy’s snobbish mother shipped her off to boarding school, Joe, her high school squeeze, had a drunken one-night stand with Lauren, whose parents kicked her out when she wanted to keep her baby. Joe married someone else, had two children, was widowed, and then married Teddy. Unfortunately, Dylan’s suddenly become a suspect in the murder of Cliff Flaherty, a writer for local TV puppet show Tippy-Toe & Tinker, who was found floating in the harbor next to Teddy’s boat. Even though he’s the sheriff, Joe has to recuse himself from the case because Dylan’s his son. But that doesn’t stop Teddy and Colleen from investigating. Since Poonya, the zoo’s red panda, one of her charges, has recently been written into the TV program’s script, Teddy’s gotten to know all the puppeteers, most of whom had good reason to hate Flaherty. When Dylan is arrested, Teddy redoubles her efforts. Her access to Colleen’s search engine, PlatoSchmato, allows her to dig up dirt on the crew and cast but not in time to prevent a second murder that leaves her in danger.

THE PUFFIN OF DEATH
by Betty Webb
Mystery

THE LLAMA OF DEATH
by Betty Webb
Mystery

THE KOALA OF DEATH
by Betty Webb
Fiction