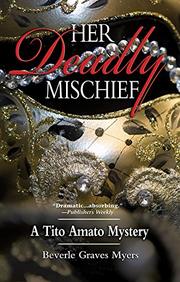 An interrupted aria at the Teatro San Marco, 1742.

Tito Amato, the principal castrato at Venice’s main opera venue, is midway through the debut performance of Armida when a spectator tumbles into the pit from the fourth tier. Zulietta Giardino, a much-admired courtesan, had been sitting in the box of Alessio Pino, handsome son of the isle of Murano’s master glassmaker. With everyone’s gaze on the stage, Tito, looking toward the audience, is the only eyewitness. As he tells the Messer Grande, chief of the Venetian constabulary, he saw a very tall, caped intruder, masked for carnevale, struggling with Zulietta just before she fell. When Tito recounts the evening’s events to his wife Liya, a Jewess disowned by her family for the indiscretion that resulted in her son Titolino, she joins him in researching Zulietta’s background, rooted in the Jewish ghetto. Meanwhile, Tito and the Messer Grande investigate Zulietta’s staff, which includes Pamarino the dwarf; her many lovers; and her rival La Samsona, who had wagered Zulietta her cache of diamonds that she would be the first to sit in Alessio’s box. With barely enough time to rehearse a new opera, Tito and Liya confront rampant anti-Semitism, the kidnapping of Titolino and more death before Venice simmers down.

The mystery is serviceable enough, but the real accomplishment of Myers (The Iron Tongue of Midnight, 2008, etc.) is her rendering of 18th-century Venice.

FACE OF THE ENEMY
by Joanne Dobson
Fiction

THE IRON TONGUE OF MIDNIGHT
by Beverle Graves Myers
Fiction