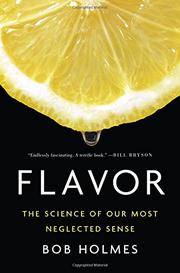 The Science of Our Most Neglected Sense
by Bob Holmes
BUY NOW FROM
AMAZON
GET WEEKLY BOOK RECOMMENDATIONS:

An introduction to what flavor is and how we experience it.

In the early chapters, Holmes, a longtime correspondent for New Scientist and an avid cook, gets a bit bogged down in the biology of taste, resulting in a slow narrative pace during his discussions of odor receptors, retronasal olfaction, and genetic differences in taste perception. Matters pick up, however, in the third chapter, “The Pursuit of Pain,” in which the author turns away from taste and smell and explores another aspect of flavor: burn. Holmes blends accounts of his interviews with researchers with his own experiences testing the fire levels of various chili peppers, a narrative pattern he follows in later chapters. In the next chapter, “This is Your Brain on Wine,” he recounts experiments that reveal the importance of factors such as the color and weight of the crockery or the sound the food makes in the mouth. He also reports that researchers are finding that the brain binds together inputs from many sensory channels to create the sensation of flavor. In other chapters, Holmes takes up the problems of keeping flavor in certain crops, such as tomatoes and strawberries, the development of appealing ready-to-eat meals for the military, and how flavor affects food intake. The author chronicles his visit to the Culinary Institute of America to see students learning how to create flavor in the kitchen. He also spent time with scientists working in the modern flavor industry, chemists who take flavors apart and build them up again to enhance processed foods. Among the odder experiments conducted by the author, who often put himself front and center, was decanting wine into his kitchen blender to see how it affected the flavor; the results are intriguing.

An uneven work, but some of the chapters could have lives of their own as entertaining magazine pieces.